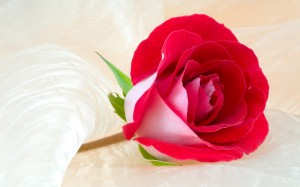 Secularists have struggled to explain why we have a generally shared sense of beauty (allowing for some differences in taste). Most often they refer to the value things we call beautiful have in the process of evolution, and they consequently reduce beauty to usefulness. Much of postmodern art takes this reduction to its logical end by insisting that one thing is not actually more beautiful than another.

Of course, we all know better than this in our hearts. Just what purpose does the superior beauty of a rose play in an evolutionary scheme? With no superior usefulness in this flower, just why do we have a shared sense of its surpassing attractiveness? Why do we prefer roses as gifts to the corpse flower? Poets such as Robert Burns seem to consider comparison to a rose a great compliment: “O my Luve’s like a red, red rose, That’s newly sprung in June.”

Tastes differ but the concept of beautiful music is likewise universal. We all have the sense that properly arranged sounds can have a pleasant effect. Why this is so is still mysterious when consider from a purely naturalistic point of view.

The Bible, however, reveals where beauty comes from and why we have a generally shared sense of it. We can see this revelation in a most interesting word the Holy Spirit inspired for prominent use in the New Testament — charis, which we commonly translate as “grace.” In common, secular usage, charis referred to things considered beautiful and lovely. By extension, it became the word for any act that was of a beautiful nature, and charis also referred to the subjective impression and objective effect created by a beautiful act. All of these uses are reflected in the New Testament.

The Bauer, Arndt, and Gingrich lexicon affirms that “attrictiveness” is a root concept of charis in NT usage, and traces the word’s usage to the expression of the beauty in God’s saving act at Calvary and that beauty’s reception in grateful believers. In the Theological Dictionary of the New Testament, Hans Conzelmann notes that charis is initially and fundamentally “that which delights.” The classic, 1939, International Standard Bible Encyclopedia similarly traces the development of this beauty from its origin in God to its expression by Him, and to its impact on the hearts of recipients:

In secular Greek of all periods it is also a very common word, and in both Biblical and secular Greek it is used with far more meanings than can be represented by any one term in English Primarily (a) the word seems to denote pleasant external appearance, “gracefulness” “loveliness”; compare the personification in the Graces.” Such a use is found in Luke 4:22, where `wondered at the charm of his words’ is a good translation; and similarly in Colossians 4:6….Concretely, charis may mean the act by which graciousness is expressed, as in 1 Corinthians 16:3, where the King James Version translates by “liberality,” and the Revised Version (British and American) by “bounty.” These various meanings naturally tend to blend into each other, and in certain cases it is difficult to fix the precise meaning that the writer meant the word to convey, a confusion that is common to both New Testament and secular Greek And in secular Greek the word has a still larger variety of meanings that scarcely concern the theologian. (http://www.internationalstandardbible.com/G/grace.html)

Beauty has its origin in God because He is beauty. What He does, whether in creation or salvation, shows forth His beauty.

One thing I have asked from the Lord, that I shall seek:
That I may dwell in the house of the Lord all the days of my life,
To behold the beauty of the Lord
And to meditate in His temple. (Psalm 27:4 NASB)

Splendor and majesty are before Him,
Strength and beauty are in His sanctuary. (Psalm 95:6 NASB)

The flower is beautiful because God made it so (James 1:11), and we have the ability to appreciate its beauty because we are made in God’s image (Genesis 1:26-27, James 3:9).

God intends that we who have received His saving grace show that beauty to the watching world through how we live. It has aways been God’s intent to show His beauty to the world through His people (Lamentations 2:15,  Hosea 14:5-7), and we now have the high honor of reflecting God’s ultimate expression of charis.

When God finally reveals His holy city —  the New Jerusalem, which tangibly pictures His people —  to all who see, the city radiates the beauty of God:

The material of the wall was jasper; and the city was pure gold, like clear glass. The foundation stones of the city wall were adorned with every kind of precious stone. The first foundation stone was jasper; the second, sapphire; the third, chalcedony; the fourth, emerald; the fifth, sardonyx; the sixth, sardius; the seventh, chrysolite; the eighth, beryl; the ninth, topaz; the tenth, chrysoprase; the eleventh, jacinth; the twelfth, amethyst. And the twelve gates were twelve pearls; each one of the gates was a single pearl. And the street of the city was pure gold, like transparent glass. (Revelation 21:18-21 NASB)

The beauty in things comes from God, and our common heritage as creatures in God’s image gives us our mysterious, shared concept of beauty. The rose is beautiful because God made it that way and our agreement that it is beautiful is a witness to our shared likeness to Him.