Iglesia ni Cristo at a Glance

Iglesia ni Cristo: A cult, both theologically and sociologically

The movement is considered to be theologically a cult a Christianity. It was long not considered a cult from a sociological perspective. (Note the difference between the two.) Initially we held that view as well.

However, in recent years more and more former and current members of the Iglesia ni Cristo have reported not just cult-like elements, but an increase in the number of such elements as well as the intensity of them. At present, in our opinion Iglesia ni Cristo is a cult, both theologically and sociologically.

Some of the InC’s cult-like elements have been present for long time, as shown in this 2004 article by AFP:

The sect was founded in 1914 by […] Felix Manalo, a disaffected former member of the Seventh Day Adventists.

Recruiting mostly from the working classes, the sect has several million adherents and has even expanded abroad, spread by the country’s large overseas work force.

By some accounts, it is now the second largest formal religion in the Philippines, a former Spanish and US colony, after Catholicism.

Discipline and conservatism define the sect. Attendance is compulsory at twice-weekly masses inside its distinctive and brightly lit spire-topped churches, where the women sit apart from the men.

Part of every member’s income goes to tithes. Dancing is prohibited, along with eating animal blood.

Iglesia spokesmen have said the sect provides “guidance” to its voters, in line with the sect’s belief that its chief minister is authorized by God to interpret the teachings of the Bible in contemporary times.

Manila pollster Mahar Mangahas of Social Weather Stations said that despite the bloc-vote weapon, the Iglesia’s recent election record is mixed. However, its support has been decisive in close contests. 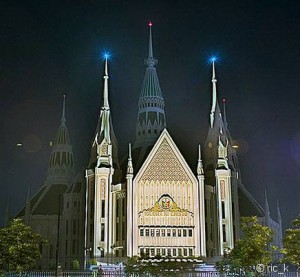 Catholic Answers, a lay-run organization the provides apologetics information from a Catholic perspective, says this about the movement:

The organization publishes two magazines, Pasugo and God’s Message, which devote most of their energies toward condemning other Christian churches, especially the Catholic Church.

The majority of the Iglesia’s members are ex-Catholics. The Philippines is the only dominantly Catholic nation in the Far East, with eighty-four percent of its population belonging to the Church.

Since this is its largest potential source of converts, Iglesia relies on anti-Catholic scare tactics as support for its own doctrines, which cannot withstand biblical scrutiny. The Iglesia tries to convince people of its doctrines not by proving they are right, but by attempting to prove the Catholic Church’s teachings are wrong.
– Source: Iglesia ni Cristo Entry in Catholic Answers.

The Iglesia considers those who claim to be “born-again” or Evangelicals to be misguided–and even deceivers. Almost every issue of Pasugo has an article which debunks the Trinity, and many have pieces refuting the doctrine that faith alone is sufficient for salvation. […]

Further, the INC’s teaching is be wary of Evangelicals […]

Missionaries are actually viewed as a threat.
– Source: The Iglesia ni Cristo and Evangelical Christianity

In her paper, Harper explains why the InC has this attitude.

In support of its various aberrant and/or heretical doctrines the Iglesia ni Cristo often refers to the writings of George M. Lamsa. On this, the Christian Research Institute writes:

Lamsa’s strongest supporters and colleagues have (apparently) always been cultists and aberrant Christian religions, not evangelicals.
[…]

The widespread support Lamsa enjoyed from non-Christian groups is a strong indication that he promoted metaphysical, heretical, and unscholarly teachings — not evangelical and scholarly.

Lamsa developed his own cultlike following over the years. He founded the Aramaic Bible Society in 1943 to propagate his work. Four years later he founded the Calvary Missionary Church and gained a larger following through print and radio. Today the Aramaic Bible Distribution Society desires to carry on the “Lamsa work” and place a Lamsa Bible “on every pulpit and in every home.” It considers Lamsa’s life miraculous and singularly qualified to bring “Truth” to the world. Society brochures state, “We believe that long ago, God formulated a Plan — and when the time was right, He brought Lamsa into the world to begin the fulfillment of that Plan.”

While Christian scholarship has disregarded or criticized Lamsa’s work, cults and new religions often quote him in print and debate when it serves their purposes. In addition to the five groups mentioned above, the Jehovah’s Witnesses, the Holy Order of MANS, Christadelphianism, Iglesia ni Cristo, and Astara have all tapped Lamsa’s material. These groups have consistently quoted Lamsa in opposition to evangelical Christian beliefs, further suggesting Lamsa’s distance from the biblical faith.

On the surface, Lamsa appears to be a revealer of biblical truth and culture and a friend of evangelical Christianity. Closer study, however, has revealed that Lamsa promotes metaphysical, not evangelical teachings which have led him to inaccurate interpretations and translations of portions of the Bible. As an ambassador of Nestorian, not biblical culture, Lamsa became a cultic figure in his own right.

Although Lamsa appears to offer truth to his readers, he preaches many and severe errors instead. The biblical author Jude warned against false teachers like Lamsa who are like “clouds without water” and “autumn trees without fruit, doubly dead” which deliver the opposite of what they promise. Therefore, Christians should not receive, promote, or refer to Lamsa’s work, nor stock his books in their libraries (unless it is for the purpose of discernment ministry) or bookstores. When questions about the biblical text, culture, or Jesus’ teachings arise, one should instead refer to scholarly and evangelical books on these subjects. When cults and new religions cite Lamsa in opposition to evangelical teaching, one must “contend earnestly for the faith” (Jude 3), exposing the lifelessness of Lamsa’s teaching and leading them to the fruit of the faith once for all delivered to the saints.
– Source: George M. Lamsa: Christian Scholar or Cultic Torchbearer?, by by John P. Juedes, Christian Research Journal, Fall 1989

As is abundantly clear, the Iglesia Ni Cristo is a cult. They deny essential historic Christian doctrine–namely the Trinity and the divinity of Jesus Christ. They hold an almost unbreakable grip on their members and they impose a man-made path to salvation through service and works. Our Lord predicted that in the last days there would come many who claim to be Christ and lead people astray (Matthew 24:5). Thankfully he also said that the true believers would not be turned away (John 6:37).

As Christians, we must be wary of the teachings of false messiahs and cultic offshoots of Christianity, such as the Iglesia Ni Cristo. We must be well grounded in the word of God so that we can spot these purveyors of falsehood. We must also realize that the people who are trapped in these cults need the salvation that can be found in Jesus Christ–the only Son of God–just as much as we did when we were lost in our sin.
– Source: What is Iglesia ni Cristo?

It’s a controversial church with millions of followers around the world known as the Iglesia Ni Cristo. Thousands of Canadians belong to congregations here. INC church members in the Philippines are accused of financial irregularities, kidnapping and even the murder of a Canadian man. The church denies the allegations.
– Source: INC church members accused of kidnapping, murder in Philippines, The Fifth Estate, November 11, 2018

Anton’s interests vary from Christian apologetics to street photography. He’s a coffee connoisseur who grinds his favorite coffees with an antique, cast-iron #3 Spong for use in either a stove-top Bialetti, a french press, or the Aeropress.