A Pentacle, also called Pentagram, is

[a] five-pointed star, often held to have magical or mystical significance, formed by five straight lines connecting the vertices of a pentagon and enclosing another pentagon in the completed figure.
– Source: The American Heritage Dictionary of the English Language

As a religious symbol, the pentacle (or pentagram) is used by both Satanists and Wiccans. However, both groups use the symbol in different ways, and assign different meanings to it.

Those differences are explained in a FAQ provided by Witches Voice, the most prominent Wicca site on the net:

Q: So why do you use that “Satanic” symbol?
A: The pentagram, or five pointed star, is not Satanic. Pythagoras used it as a symbol of health and his followers wore them in order to recognize one another. In Medieval times, some Christian knights used the pentagram as their symbol. To modern Wiccans the pentagram means many things; The five points correspond to the elements Air, Earth, Fire and Water with the top point corresponding to “Spirit”. The pentagram in a circle may also represent a human with their legs and arms outstretched, surrounded by universal wisdom or the “Goddess” – humankind at one with the environment. Many Witches and other pagan practitioners do not wear the pentacle at all, but have other symbols of special meaning to them.

Satanists turn the symbol upside-down, which puts the elements of Fire and Earth at the top (Fire symbolizes willpower and passion and Earth, prosperity and earthly goods) and Spirit, spirituality, at the bottom. Satanists also turn the cross upside-down. This, in itself, does not make the cross or pentagram a Satanic symbol. In some Wiccan traditions, the reversed pentagram is a symbol of “second degree” status – one who has been elevated from “initiate”. To members of these traditions, the reversed pentagram is considered highly positive and has no connection to Satanism. A symbol is simply an image or mark in itself. It is the mind and the beliefs of the beholder which attribute to it a particular meaning.
– Source: Witch/Wiccan F.A.Q.s, Witchvox.com

Table of Contents hide
1 Pentacle or Pentagram: is there a difference?
2 Pentagram: Symbol of the Second Degree
3 Images

Pentacle or Pentagram: is there a difference?

The terms pentacle and pentagram are often used interchangeably, but most Wiccans say they are somewhat different. A pentagram is simply a five-pointed star, while a pentacle surrounds the star with a circle.

Both pentacles and pentagrams are ancient symbols that have been used by many different religions, including Christianity and Judaism. Wiccans trace their use of the symbols back to the ancient Celts, whose earth-based religion serves as a model for many modern pagan groups.

Many people mistakenly associate the pentacle with Satanism. In fact, Satanists generally use an upside-down pentacle, often with a goat’s head in the center.
– Source: Witches fight for symbols on gravestones, The Salem News, via the Henry Daily Herald, USA, Jan. 20, 2006

The pentacle is usually a flat piece of brass, gold, silver, wood, wax or clay, inscribed with certain symbols. The most common, and indeed the only necessary one, is the pentagram, the five-pointed star which has been used in magic for millenia.

The pentacle was “borrowed” from ceremonial magic. In this ancient art it was often an instrument of protection, or a tool used to evoke spirits. In Wicca, the pentacle represents the element of Earth and is a convenient tool upon which to plae amulets, charms or other objects to be ritually consecrated. It is sometimes used to summon the Gods and Goddesses.

Pentacles are also hung over doors and windows to act as protective devices, or are ritually manipulated to draw money owing to the pentacle’s Earth associations.
– Source: Scott Cunningham, Wicca: A Guide for the Solitary Practitioner. LLewellyn Publications, St. Paul, Minnesota. 2000. Page 33.

Pentagram: Symbol of the Second Degree

“[i]n some Wiccan traditions, the reversed pentagram is a symbol of “second degree” status – one who has been elevated from “initiate”.” This is in reference to the initiation rites used in most Wiccan traditions.

The symbol of the second degree is the downward-pointing Pentagram

Why is the pentagram reversed? The pentagram with its five sides is a very important symbol in Wicca. In terms of spiritual growth, the pentagram is symbolic of the four functions of the personality, together with the fifth or transcendent function, the Self. The five-pointed pentagram shows that the fifth function has emerged, but is not yet transcendent. It lies buried beneath the other four. It is only with the third degree that the pentagram tilts over and attains its rightful upright direction. To turn the pentagram we must uncover that which is hidden, the unknown parts of ourselves.
– Source: Vivianne Crowley, Wicca: The Old Religion in the New Millennium. Thorsons, London. 1996. Pages 194-195 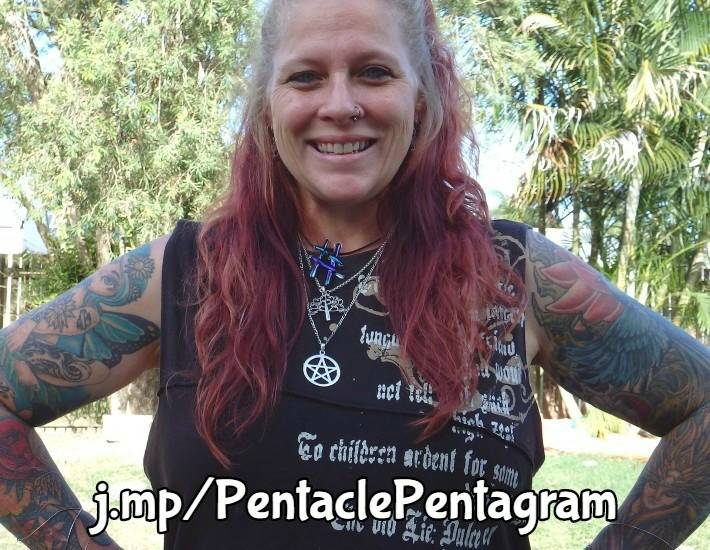