I believe phony doctorates are a moral scandal in the Church today. Many ministers are deliberately misrepresenting their academic qualifications with fake degrees.

There are two sources for these illegitimate titles: honorary doctorates and diploma mills. Honorary doctorates may be a nice gesture toward a respected person (as well as a good way to get donations), but these gestures are abused when recipients subsequently call themselves “Dr.”, implying they have done the necessary academic work to receive such a title and that the quality of such work was verified by authorities in that field.

Oral Roberts University has been especially liberal in handing out honorary doctorates throughout the charismatic world and many recipients use the title as though it were an earned one.

Honorary doctorates have been given to such esteemed recipients as Kermit the Frog, whose “doctorate” was bestowed upon him by Southampton College in New York. “Dr.” Kermit delivered the commencement address, passing along this bit of swamp-wisdom:

“Ribbit-ribbit-kneedeep-ribbit,” which means “May success and a smile always be yours… even when you’re kneedeep in the sticky muck of life.” 1

Kermit has the very same academic qualifications as many notables in the Church, including the late “Dr.” Jerry Falwell, whose formal education after high school was limited to an undergraduate degree at an unaccredited Bible College.

One can be a very good pastor or evangelist without having a doctorate. I am not demeaning those who do not have such a degree, nor am I trying to imply that self-education is invalid. Still, “Dr.” is supposed to mean something commonly understood.

I consider it unethical to treat an honorary title as though it were a legitimate one. If someone is given a “key to the city,” they are not thereby authorized to enter any building they choose whenever they want. Honorary doctorates do not qualify recipients to work in the field designated on the diploma. No one wants an honorary doctor to perform heart surgery on them.

Diploma mills, the other source of phony degrees, usually have small campuses but impressive websites. 2

They always lack respectable accreditation. Legitimate seminaries maintain rigid standards for awarding a doctoral degree and these standards are confirmed by respected accrediting agencies. These agencies are private corporations even though they are responsible to government agencies themselves. The government does not dictate what courses should be taught in a properly accredited seminary.

The diploma mill typically awards its degrees to people who complete a token of easy coursework (one diploma mill reportedly hands out “doctorates” in exchange for the reading of one book and the payment of $600). The mill’s overhead is minimal as those who run it do not have to maintain the kind of facilities or qualified staff real schools do. They consequently charge the “student” a small fee for their “course work.”

There are phony accrediting agencies that these unethical organizations use, so a “schools” “accreditation” may be as phony as their degrees. There are many diploma mills churning out degrees to undeserving ministers in a practice Christian author Steve Levicoff has referred to as “name it and frame it.”

“Dr. Dino,” (Kent Hovind), spoke in many churches, always calling himself “Dr.,” though his formal education past high school consisted of an undergraduate degree from an unaccredited Bible College, and a “doctorate” from a diploma mill run out of the modest home of a man named Lonnie Skinner. Since awarding Hovind’s “doctorate,” Skinner has named his business “Patriot Bible University,” and relocated to a small but separate building. Unfortunately for Hovind, he used similar ethics in paying his taxes and is now in prison for tax evasion. 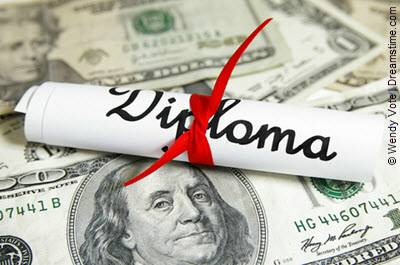 One prominent diploma mill for ministers is “Friends International Christian University.” This “school” awards doctorates to candidates who, after completing very minimal prerequisites, finish eight, easy correspondence classes. A diligent high school graduate can have his or her “doctorate” in less than a year.

The average, real, earned doctorate takes over eight years to obtain after earning a bachelors and then a master’s degree. Doctorates from Friends International Christian University have been awarded to ministers such as “Dr.” Fred Price, “Dr.” T. D. Jakes, “Dr.” Ron Kenoly, and “Dr.” Stephen Wiley.

Perhaps no diploma mill has been more successful than “Life Christian University,” which consists of a group of people with mostly phony degrees who have awarded “doctorates” to dignitaries such as “Dr.” Rodney Howard-Browne, “Dr.” Joyce Meyer, “Dr.” Kenneth Copeland, “Dr.” Norvel Hayes, “Dr.” Kevin McNulty, “Dr. Billye Brim, and “Dr.” Benny Hinn. Whether these “doctorates” are “earned” or honorary is not clear — though the difference would be little more than a technicality.

Some diploma mills for ministers make no pretense to legitimacy. American Fellowship Church sells an honorary “Doctorate of Divinity degree” for $50. The Universal Life Church offers a free “Doctorate of Divinity degree” for anyone who receives their rubber-stamp ordination. “Cambridge Theological Seminary,” also offers “free” doctorates” but if one wishes to have an actual diploma, fees will be assessed, including ones for “transcripted application,” “permanent records,” and “state-approved institutional registration.”

This mill casts aspersions on competing mills and titillates potential clients with the promise of the added prestige one will have using their phony title:

“Every time you signed your name ‘Dr.’, ‘D.D.’, ‘D.Div.’ or ‘Doctor of Divinity’, it would have greater impact, and would enhance all of your words for the Kingdom of God that ever preceded – or ever would follow . . . even after you’ve gone on to Glory: if you had a Doctor of Divinity Title.” 4

The above quote from this “seminary” website appeals to the apparent motive behind the purchase of fake degrees — the desire to have an undeserved air of academic respectability. Labeling oneself with a phony doctorate is dishonest. I am convinced that deceiving the Church about one’s academic credentials in this way is a form of lying to the Holy Spirit.

“Ananias, why has Satan filled your heart to lie to the Holy Spirit…?” (Acts 5:3 NASB)

Ananias had “exaggerated” about the percentage of his income he had given, and this deception was less serious than that of most modern, academic, “exaggeration.”

“…These have been purchased from among men as first fruits to God and to the Lamb. And no lie was found in their mouth; they are blameless.” (Revelation 14:4-5 NASB) 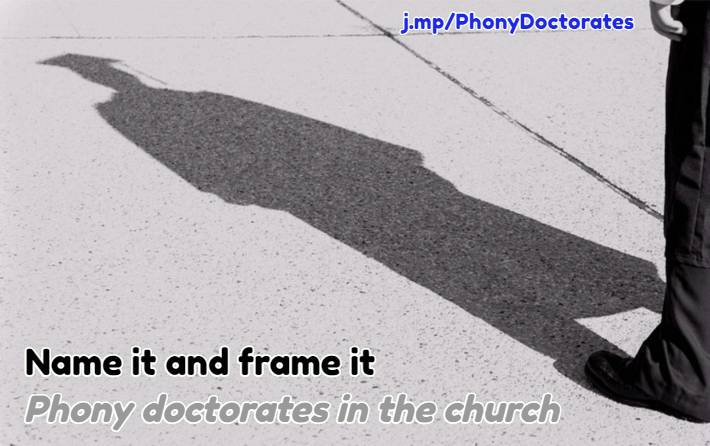