Next page: Moorish Science Temple of America – Seas of David


The Moorish Science Temple of America is…

an early 20th century religion founded by the Noble Drew Ali, a wandering African-American circus magician who claimed to have been raised by Cherokee Indians and to have learnt “high magic” in Egypt. Ali went on to style himself an “angel” and prophet of Allah.
– Source: Seas of David: Bizarre cult of Sears Tower plotter, The Times, UK, June 25, 2006

In 1913, Timothy Drew, the son of former slaves from North Carolina, established the Moorish Science Temple of the United States in Newark, New Jersey. Embodying a variety of Islam, the movement quickly spread through African American communities in urban centers across the United States, especially in the Midwest.

While mystery surrounds the origins of Drew’s association with, and knowledge of, Islam, he apparently came into contact with various belief systems while traveling abroad. Convinced that Christianity was the white man’s religion, Drew offered a brand of Islam that blended traditional Islamic beliefs, biblical teachings, Orientalism, racial pride, Masonic influences, and mythology. He proclaimed that blacks were the descendants of “Moors, ” who had originally migrated from Asia and eventually settled in Africa, specifically Morocco.

Declaring himself a prophet, he assumed the name Noble Drew Ali and wrote the Circle Seven Koran, an esoteric work, not to be confused with the Koran of orthodox Islam. Ali conferred “El” or “Bey” to the surnames of his followers, encouraged the adoption of Oriental garb, and directed his fellow “Moors” to follow strict moral and dietary guidelines. The temple also issued “Moors” identification cards, or passports, proclaiming their new identity.

As Moorish Science expanded, the organization became infiltrated with unscrupulous opportunists. In Chicago in 1929, internal rivalry led to the death of one of Ali’s rivals. When police intervened, further violence erupted and Ali was arrested. Released on bond, the prophet died under mysterious circumstances several weeks later. Some suspect that he met his death at the hands of rival “Moors, ” others believe he died as a result of a police beating, while at least one historian posits that Ali died of pneumonia.

The most significant contribution of the Moorish Science Temple movement was that it offered meaning and identity to a people marginalized by greater American society. Today, several factions of “Moors” claiming to be the heirs of Noble Drew Ali continue to preach his brand of Islam.
– Source: A.J. Scopino Jr., Organizing Black America: An Encyclopedia of African American Associations. Nina Mjagkij, editor. Garland, New York, 2001. Page 348

In 1913, Noble Drew Ali introduced the Moorish Science Temple of America religion to African Americans (Shack, 1961). This religion was the precursor to the Nation of Islam.

The main theme of the Moorish Science Temple was that African Americans needed to discover their national origin in order to experience liberation. Rather than using the name Negroes, the members were taught to refer to themselves as Asiatics, Moors, or Moorish Americans (Shack, 1961).

Additional themes focused on the pronounced strict religious taboos on eating, tobacco use, alcohol consumption, and sexual indulgence. Members carried a nationality and identification card. Many of the members engaged in verbal and physical confrontations with the European American communities.

After the death of Noble Drew Ali in 1929, his followers split into numerous sects.
– Source: Hakeem Lumumba, The Impact of Al-Islam on the African American Population, Counseling and Values (Journal), Vol. 47, 2003

Noble Drew Ali was perhaps the first African-American Islamic sectarian leader to invoke basic Islamic symbols to unite Americans of African descent (the term preferred by members of the Moorish Science Temple). He understood that in order for a people to have any sense of its own worth, it was necessary for it to have an identity, a name, a land. This identity must be distinct from any designation ascribed to it by the majority culture.

Noble Drew Ali’s intention was to unite an oppressed people, to give its members a source of pride and an opportunity to contribute individually and collectively to society. He did that by claiming that Americans of African descent were Asiatic, or Moorish, in heritage, and that in his role as the final Muslim prophet “in these days” he was to establish a community based on the five principles of love, truth, peace, freedom and justice.

The community, still very much in existence in the early 1990s, was originally known as the Moorish National and Divine Movement, but the name was soon changed to Moorish Science Temple of America.

The goals and purposes of the movement as articulated by Noble Drew Ali are “to dispense charity and provide for the mutual assistance of its members in times of distress; aid in the improvement of health and encourage the ownership of better homes; find employment for its members; teach those fundamental principles which are desired for our civilization, such as obedience to law, loyalty to government, tolerance and unity.”
– Source: Yvonne Yazbeck Haddad and Lane Idleman Smith, Mission to America: Five Islamic Sectarian Communities in North America. University Press of Florida, Gainesville, FL. 1993. Page 80

Next page: Moorish Science Temple of America – Seas of David 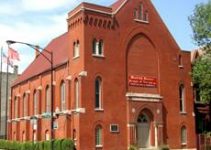