Table of Contents hide
1 They are still Oneness
2 Scripture which contradicts Oneness teaching
3 Some good verses that include the Holy Spirit
4 Some additional, theological concerns
5 Tips on dialoging with a Oneness person
6 Is Oneness Pentecostalism a Cult?

They are still Oneness

There has been much upheaval in the Oneness ranks recently but their view of God has not changed. They have a distorted notion of the Trinity and need someone to show them the scriptural teaching of the Trinity.

Since Oneness people already believe in the Deity of the Father, Son, and Holy Spirit, a Trinitarian’s main objective with a Oneness believer is to show that these three are different persons. The easiest difference to prove is that between the Father and the Son. Once this is established the Oneness doctrine is broken in principle.

A hardened Oneness person is not likely to be persuaded solely by the verses listed below, however. They have heard them before and have their own “explanations” for them.

Oneness theology is more complex than most Trinitarians realize. Those engaged in dialog with Oneness Pentecostals should learn more about them. Even though Gregory Boyd has recently embraced the error of open theism, his book Oneness Pentecostals and the Trinity is extremely good. He disproves Oneness arguments and establishes Trinitarian truth. He also has a good section on the early church fathers, showing that they were Trinitarian from the beginning — hence there was no later apostasy as the Oneness Pentecostals claim.

(Unless otherwise noted, all Scripture references come from the New International Version. Italics added for emphasis.)

“If I had not done among them what no one else did, they would not be guilty of sin. But now they have seen these miracles, and yet they have hated both me and my Father.” (John 15:24)

“Jesus replied, ‘If anyone loves me, he will obey my teaching. My Father will love him, and we will come to him and make our home with him.'” (John 14:23)

“‘But if I do judge, my decisions are right, because I am not alone. I stand with the Father, who sent me. In your own Law it is written that the testimony of two men is valid. I am one who testifies for myself; my other witness is the Father, who sent me. Then they asked him, ‘Where is your father?’ ‘You do not know me or my Father,’ Jesus replied. ‘If you knew me, you would know my Father also.'” (John 8:16-19)

“Jesus called out with a loud voice, ‘Father, into your hands I commit my spirit.’ When he had said this, he breathed his last.” (Luke 23:46)

“What about the one whom the Father set apart as his very own and sent into the world? Why then do you accuse me of blasphemy because I said, ‘I am God’s Son'”? (John 10:36)

“After Jesus said this, he looked toward heaven and prayed: ‘Father, the time has come. Glorify your Son, that your Son may glorify you.'” (John 17:1)

“I in them and you in me. May they be brought to complete unity to let the world know that you sent me and have loved them even as you have loved me.” (John 17:23)

“And now, Father, glorify me in your presence with the glory I had with you before the world began.” (John 17:5)

“Grace and peace to you from God our Father and the Lord Jesus Christ.” (Phil 1:2)

“The life appeared; we have seen it and testify to it, and we proclaim to you the eternal life, which was with the Father and has appeared to us.” (1 John 1:2)

Grace and peace be yours in abundance through the knowledge of God and of Jesus our Lord. (2 Pet 1:2)

“Grace, mercy and peace from God the Father and from Jesus Christ, the Father’s Son, will be with us in truth and love.” (2 John 1:3)

“He came and took the scroll from the right hand of him who sat on the throne.” (Rev 5:7)

John 1:1-18 is a good passage to look at as a whole with Oneness people. The context of the entire passage really undercuts the Oneness attempts to “explain” the individual verses. This passage clearly shows the distinction between the Father and the Son as persons and clearly shows the pre-existence of the Son as a person distinct from the Father. Oneness people do not believe the Son existed before the incarnation, as he is supposedly only a mode or role that the Father then assumed. The passage below comes from the New American Standard Bible.

“In the beginning was the Word, and the Word was with God, and the Word was God. He was in the beginning with God. All things came into being through Him, and apart from Him nothing came into being that has come into being. In Him was life, and the life was the Light of men. The Light shines in the darkness, and the darkness did not comprehend it. There came a man sent from God, whose name was John. He came as a witness, to testify about the Light, so that all might believe through him. He was not the Light, but he came to testify about the Light. There was the true Light which, coming into the world, enlightens every man. He was in the world, and the world was made through Him, and the world did not know Him. He came to His own, and those who were His own did not receive Him. But as many as received Him, to them He gave the right to become children of God, even to those who believe in His name, who were born, not of blood nor of the will of the flesh nor of the will of man, but of God. And the Word became flesh, and dwelt among us, and we saw His glory, glory as of the only begotten from the Father, full of grace and truth. John testified about Him and cried out, saying, “This was He of whom I said, “He who comes after me has a higher rank than I, for He existed before me.'” For of His fullness we have all received, and grace upon grace. For the Law was given through Moses; grace and truth were realized through Jesus Christ. No one has seen God at any time; the only begotten God who is in the bosom of the Father, He has explained Him.”

Some good verses that include the Holy Spirit

“Therefore go and make disciples of all nations, baptizing them in the name of the Father and of the Son and of the Holy Spirit.” (Matthew 28:19) (expect them to respond that the “name” is Jesus but “in the name of” means “with respect to” or “in the authority of”)

“May the grace of the Lord Jesus Christ, and the love of God, and the fellowship of the Holy Spirit be with you all.” (2 Corinthians 13:14)

“For through him we both have access to the Father by one Spirit.” (Ephesians 2:18)

Oneness people do not believe they are saved by faith alone. For them, salvation comes through the rite of baptism performed with the correct words said and they must depend on the one who does the baptizing to say exactly the right words. If the preacher accidentally says the wrong words while they were under the water, they think will be eternally condemned. In their theology, one cannot be saved except through a man who, when he baptizes and says the right words to make one saved, acts as a kind of priest between the individual and God. Additionally, “in the name of” simply means “with respect to” or “in the authority of.” It has nothing to do with the exact words spoken at the time of baptism as if the “baptismal formula” were a password.

From the Oneness authors I have read, it seems that they believe that at least during the incarnation, The Father was the God part of Jesus and the Son was the human part. They therefore have a low view of Christ, believing He was only half God and half man. Trinitarians believe Christ was fully God and fully man.

Tips on dialoging with a Oneness person

Keep in mind that they think you are unsaved and that it is their duty to “witness” to you.

Never use the argument that Elohim is in the plural form and thus indicates plurality of persons. Nor should one refer to Genesis 1:26 which says “Let us make mankind in our image” as an argument for the Trinity. These two instances are plurals of majesty — a common device in the Hebrew language. As Trinitarians we can look back on these things and recognize early hints at the Trinity but these are totally invalid arguments to use with a non-Trinitarian (and most Oneness people know this).

When Oneness people object that the word “Trinity” is not in the Bible, respond that it is a word used to explain or describe what the Bible clearly teaches. Point out that they use many words and phrases not found in the Bible such as Bible, incarnation, mode, initial physical evidence, the God-Man, and the Fatherhood of Christ.

Keep your cool and remain confident. Some of the Oneness people I have talked to were unbelievably aggressive. They wouldn’t let me complete a whole sentence. When they act that way they aren’t listening. They are just trying to bully you into submission or cause you to react angrily (at which point they have “won”).

After they are done with their inevitable diatribe, ask if the two of you can pray together. It puts them in a terribly uncomfortable position. If they do agree to pray, don’t pray about the disagreement; focus on such things as winning your community to Christ. Be pleasant when you leave. As with many aberrant groups, Oneness Pentecostals seem to judge the outcome of an encounter with a Trinitarian by how flustered they leave that person.

Is Oneness Pentecostalism a Cult?

There is unfortunately a difference in the way scholars use the word “cult” and the way most Christians do. Christians commonly assume a cult member is unsaved. Scholars use the word cult in ways that include heretical groups that may still be mostly Christian. It is in this way that most scholars classify Oneness Pentecostalism as a cult. Nevertheless, I think common usage determines meaning for common discussion and we should not use terms in a way that will be misunderstood in this context. When speaking outside of the smaller world of scholars, I would refrain from calling Oneness Pentecostalism a cult, though I would not hesitate to identify Oneness theology as heresy. 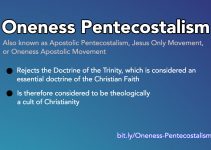