The term ‘cult of Christianity‘ is used of a group, church or organization whose central teachings and/or practices are claimed to be biblical or representative of biblical Christianity, but which are in fact unbiblical and not Christian in nature.

Prime examples are the Church of Jesus Christ of Latter-day Saints (LDS, better known as the Mormon church), Jehovah’s Witnesses, and Christian Science.

The term can also be applied to groups, organizations or churches whose ‘statement of faith’ or ‘statement of beliefs’ may sound orthodox, but who add aberrant, heterodox, sub-orthodox and/or heretical teachings to such an extend that the essential doctrines of the Christian faith are negatively affected. (Examples: Seventh-day Adventist Church, International Church of Christ).

As we explain at one of our sister websites, CultFAQ.org, the term ‘cult’ has different meanings in different contexts.

Improper use of the term generally leads to much confusion, which is one reason why some people — including those who defend organizations that have been labeled as cults — advocate against using the term at all.

In our view use of the term ‘cult’ is legitimate and correct, as long as the user explains in what sense it is used.

For instance, the term ‘cult’ can generally be defined theologically and/or sociologically.

Theology has to do with the doctrinal reasons why a particular group’s beliefs and/or practices are considered unorthodox.

Sociology takes into consideration the actions of a group or movement (e.g. deceptive recruiting, undue pressure on members, forced separation from family and friends).

If you simply call a particular group a ‘cult’ — without stating whether you do so based on theological and/or sociological indicators — you are not making yourself clear.

An Example
A few years back, when a high-profile Mormon made clear that he was running for president of the USA, the discussion of whether or not the Mormon Church is a cult was back in the news. But more often than not the discussion was muddled by the incorrect use of the term ‘cult’.

For instance, Evangelical Christians consider The Church of Jesus Christ of Latter-day Saints (LDS, or Mormon Church) to be, theologically, a cult of Christianity.

In other words, the Mormon Church’s doctrines differ to such an extend from the central, essential doctrines of the Christian faith (i.e. those doctrines that make Christianity Christian and not something else) that it must be considered to be — from an Evangelical Christian theological perspective — a cult of Christianity.

At the same time, most Evangelical Christians (and others) do not consider the Mormon Church to be a cult as defined sociologically. While the church has a strict belief system that includes a sometimes heavy-handed approach to church discipline, that in and of it itself does not make it a cult in the sociological sense of the word.

For more on this see:

CultDefinition.com — a closer look at the definitions of the term ‘cult’.
CultFAQ.org — Frequently Asked Questions About Cults, Sects, and Related Issues

In determining whether or not a particular group or movement is a cult of Christianity the emphasis generally is on the group’s theology.

In his book Unmasking The Cults, Alan Gomes — working from the perspective of an Evangelical Christian — defines a cult of Christianity as follows:

A cult of Christianity is a group of people, which claiming to be Christian, embraces a particular doctrinal system taught by an individual leader, group of leaders, or organization, which (system) denies (either explicitly or implicitly) one or more of the central doctrines of the Christian faith as taught in the sixty-six books of the Bible.
– Source: Alan Gomes, Cult: A Theological Definition, excerpt from “Unmasking The Cults“ 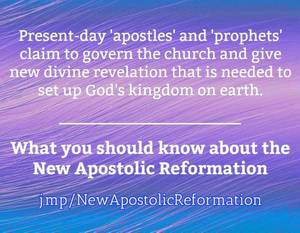 Note: Often cults of Christianity — or groups moving into that direction — make non-essentials essentials. That is, they will place an extraordinary emphasis on non-essential doctrines and practices to such an extent that those doctrines become — to them — essential.

A wider definition of the term ‘cult of Christianity’ takes actions and practices into account as well.

As Van Baalen stated, ‘If practice follows from theory, if life is based upon teaching, it follows that the wrong doctrine will issue in the wrong attitude toward God and Christ, and consequently in warped and twisted Christian life.’
– Alan Gomes, Cult: A Theological Definition, excerpt from “Unmasking The Cults“

In Life’s Ultimate Questions: An Introduction to Philosophy, Ronald Nash recounts an anecdote about a California gangster named Mickey Cohen. Cohen went forward in a Billy Graham crusade, and made a profession of faith. But when, after a few months, people began to ask why his lifestyle did not change, he said that just as there are Christian politicians and Christian movie stars, he wanted to be a Christian gangster.

Therefore, a movement that – while adhering to the essential doctrines of the Christian faith – adds unbiblical and extra-biblical teachings may, in doing so, place itself further and further outside orthodox Christianity.

Video: The Marks of a Cult — A Biblical Analysis with Eric Holmberg

This excellent presentation is also available on DVD.

Some cult experts who operate from a non-Christian perspective work with, among others, people involved in cults of Christianity.

In doing so they tend to focus primarily — or exclusively — on the sociological aspects of such movements. After all, most of them lack first-hand knowledge of sound Christian theology, and do not enjoy the benefits of biblical spiritual discernment.

Most experts take a professional approach — either referring their client to, or consulting with someone who is in a better position to address issues of theology (which more often than not underlie a movement’s cultic behavior).

Others allow personal biases to interfere. One particularly bad apple is bitterly hostile toward Christians.

If you need the services of a cult expert for a loved-one who is part of a cult of Christianity, make sure to look for one with with first-hand knowledge of both theological- and sociological cult-related issues.

Throughout Apologetics Index we use a color key for the resources we link to.

Listed here are some examples of groups and movements widely considered by Christians to be, theologically, cults of Christianity. 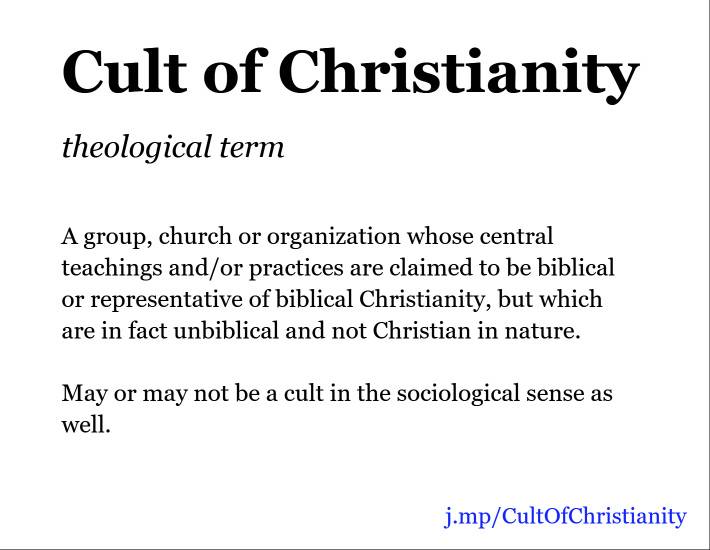 You may use this graphic on your blog, website, or social media.

Both have extensive experience in helping people leave abusive churches and deal with the effects of spiritual abuse.

First published (or major update) on Wednesday, May 11, 2016.
Last updated on November 12, 2017. Original content is © Copyright Apologetics Index. All Rights Reserved. For usage guidelines see link at the bottom.