Narconon at a Glance

The publishers of Apologetics Index consider the Church of Scientology (including its related entities) to be a commercial enterprise that masquerades as a religion. In our view Scientology preys on vulnerable people through a variety of front groups, including Narconon (which operates in some prisons under the name “Criminon”).

In our opinion Scientology’s medical teachings — based as they are on the writings of founder L. Ron Hubbard — amount to a mixture of fantasy, lies and quackery. [4]

Wikipedia puts it this way:

[Narconon’s] drug rehabilitation treatment has been described as “medically unsafe”, “quackery” and “medical fraud”, while academic and medical experts have dismissed its educational programme as containing “factual errors in basic concepts such as physical and mental effects, addiction and even spelling.” [3]

We encourage those who are addicted to narcotics or other substances to not get involved with Scientology or its front group, but to instead contact legitimate organizations, such as Narcotics Anonymous

How the Church of Scientology describes Narconon 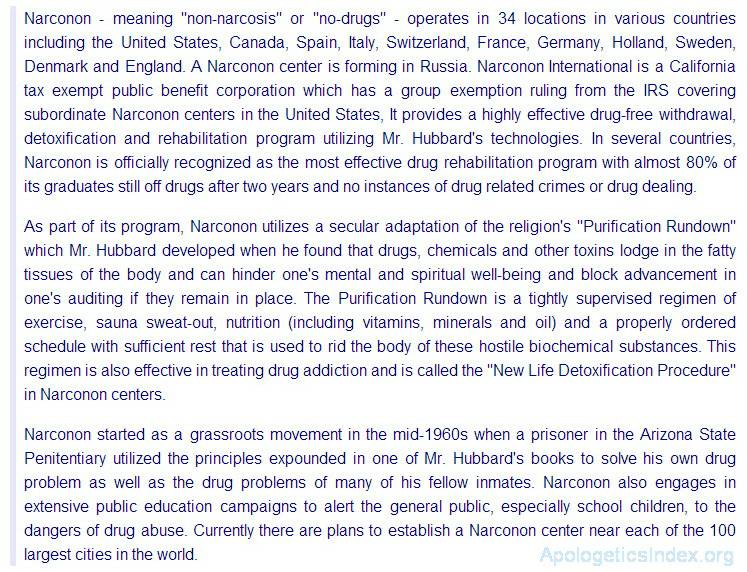 First published (or major update) on Friday, March 25, 2016.
Last updated on May 30, 2017.
Original content is © Copyright Apologetics Index. All Rights Reserved. For usage guidelines see link at the bottom.