A colorado newspaper described the group as follows:

The Twelve Tribes’ evening worship service in Manitou Springs is reminiscent of a scene straight from a hippie commune in the 1960s and early ’70s, and this group does, in fact, live in a communal setting.

But the similarities end there. No drugs and alcohol are allowed in Twelve Tribes. The women wear modest, baggy attire straight out of 19th-century America. The speakers at the religious services talk repeatedly about end times. And Scripture runs their life.

Begun in 1972 in Chattanooga, Tenn., Twelve Tribes is the brainchild of Elbert Eugene Spriggs, who is still part of the tribe but has never been its spiritual figurehead. Current worldwide membership is about 2,000.

The local Twelve Tribes community ranges in age from 1 to about 60 and consists of seven families and 12 single adults. They live and worship together in two neighboring Manitou Springs homes, and strive to replicate how they believe Christians lived in the first century: chaste, pious, hardworking and living together under the same roof.
Members give up almost all their possessions to be part of the tribe.

“I came into this world with nothing, and that’s how I will leave it,” said 31-year-old Malak Chesed Gould – born Derek Gould – who joined Twelve Tribes a decade ago and is now a community leader.

Twelve Tribes attempts to include every member in decisionmaking, but there is a hierarchy. Each of the communities – 25 in the U.S. and about 25 in other countries – is overseen by in-house leaders, who are overseen by a tribal council in a regional office, who are, in turn, overseen by the Apostolic Council, a fluid number of elders scattered across the U.S.

Communities support themselves through their small businesses, and all profits go into a common pool.

The local Twelve Tribes runs three Manitou Springs businesses: the Maté Factor cafe, the organic-produce store Common Sense Market, and the tree-cutting business Forest Keepers. They don’t proselytize to customers, but if someone inquires about their faith, they will talk about it.

Because Twelve Tribes is a 501 (d) – used by for-profit organizations with a religious purpose and a common treasury – the community pays taxes on its earnings and property. […]

Though Twelve Tribes has sometimes been characterized as a cult, its members say it doesn’t have the negative characteristics often associated with a cult: abuse and mind control.

“We don’t teach abuse,” said Apostolic Council member Eddie Wiseman, who is currently living in the tribe’s community in Purceville, Va. “Our safety net is that we don’t silence people. This has been very effective in keeping the community together. People can also leave the tribe whenever they want.”

Allegations of child abuse have been made against some Twelve Tribes communities, and some people have accused them of mind control, but the faith has never been charged in connection with either. Its biggest blemish occurred in 2001, when two of its businesses in Green County, N.Y., were fined for breaking child labor laws.
– Source: Mark Barna, Twelve Tribes living as one, The Gazette, Jan. 2, 2009

Michael Painter was in the Communities for 18 years and started many of the Communities’ “cottage industries,” and James Howell was Spriggs personal secretary for over a decade.

Michael Painter and James Howell, two former high ranking Twelve Tribes members, speak out against the group and its leader

Additional portions of this interview can be viewed here. 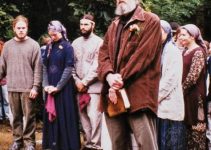