An article by G. Richard Fisher.

Many Christians uncritically accept the writings of Watchman Nee even though few know anything about his background. Many are impressed by the volume of his work and the dogmatism and feeling of deep spirituality that characterize his writings. His ideas and books still influence charismatics, fundamentalists and people in between.

But one need not be a theologian to discover that his teachings call for scrutiny and caution by Christians. Much can be learned about Nee from a cursory reading of some of his books and the writings of others who were around him. These show that his theology developed through encounters with four different people and it was from these that he “borrowed” ideas extensively. Each new book seemed to develop from “discoveries” received from these teachers.

Nee’s basic writings cover over 40 volumes and have been researched by Dana Roberts. His findings are not flattering to Nee and are presented in his book Understanding Watchman Nee. This writer is indebted to Roberts for much of the material in this article.

Nee was born Nee Shi-Tsu in November 1903. His mother, a Methodist mission convert, later changed his name to “Bell ringer,” or Watchman, with all the Christian connotations. He claimed conversion to Christianity in April 1920.

At a Bible school in Shanghai, he came under the influence of a female teacher, Miss Yu. Under her instruction he seriously sought a “second blessing.” He later said he felt he had “recovered” truth for the church and taught four subsequent experiences after conversion.

Miss Yu directed Nee to Miss M.E. Barber, who taught him in the Keswick concept of the filling of the Spirit. In February 1922, Nee claimed, he was “baptized in the Spirit” and put himself under the continuing instruction of Barber. Barber then was responsible for the development of Nee’s perfectionistic theology.

Barber also convinced Nee of the truth of the “partial rapture” theory assigning carnal believers to a kind of Protestant purgatory. Nee admitted that in his writings on the book of Revelation, he depended on a book from Barber’s library by Robert Govett that teaches a partial rapture. Thus we see how he got these new “insights” that became the basis for new books.

Later, Barber allowed Nee to read the works of Jesse Penn Lewis when she thought he was “mature enough,” Roberts says. Penn Lewis, a mystic with a Welsh Methodist background, saw many parts to man’s inner nature. Her literature, considered “holiness literature,” is the main source for Nee’s Spiritual Man series, in which he developed a gnostic view of man, Roberts says.

Nee also got doses of Catholic mysticism through the writings of Madame Jeanne Guyon, as published in Penn Lewis’ magazine.

Nee continued to read widely and when Barber exposed him to the writings of John Darby, he found the basis for his ecclesiology, or thoughts on the church. From that point, everything Nee wrote on the church is easily identified with the teachings of the Plymouth Brethren. He rejected clergy as unscriptural.

During this time Nee also professed to be led by inner leadings. He justified this subjective means of revelation by saying that the ways of God are not known by external means but by “internal registrations.” Again, he was rejecting external authority.

Nee had his own eclectic system developed when he encountered another woman in 1935. Elizabeth Fischbacker introduced him to Pentecostal theology and speaking in tongues. Nee did not regard tongues as unbiblical but never spoke in tongues himself.

In 1942, Nee took over the running of his brother George’s chemical factory. He consigned all the property to the church and sought to have the church members as the factory workers. As a result he contradicted previous positions he had taken regarding disassociation of the church and business.

In 1949, Mao-Tse Tung came to power and Communist China was born. Nee, a factory owner, was seen as an imperialist and eventually was jailed. He remained in prison until his death in 1972.

The teachings that developed over Nee’s lifetime and out of his encounters with these women and the teachings they directed him to are dangerous to Christians seeking clear guidelines to follow. Space allows a listing of only a few of the problems in Nee’s teachings:

When a Christian begins to see Nee as a guide in determining the value of other Christian writers, or sees Nee’s writings as a key to spirituality, that person is headed for trouble.

Nee’s presuppositions are suspect in light of the Word of God. His books provide grist for cult groups such as The Way, The Alamo Foundation, the Children of God and other groups. The astute believer should watch out for Watchman Nee.

The book Understanding Watchman Nee, which this article refers to, is out of print. However, second-hand copies become available from time to time. 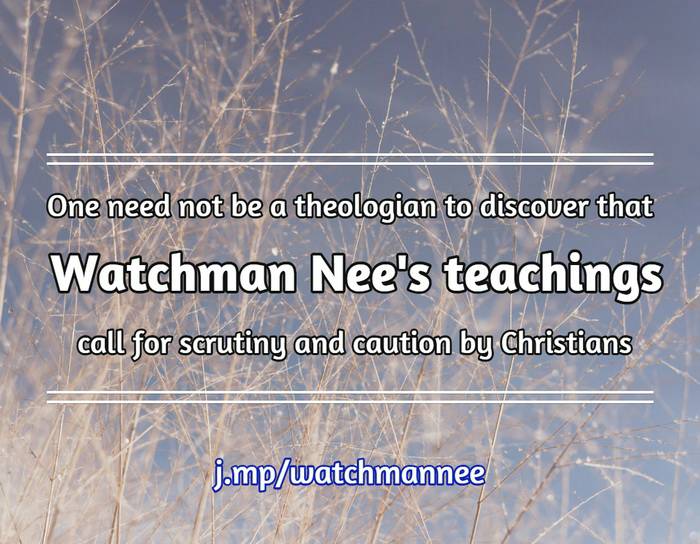 You are welcome to post this graphic on your blog, website or elsewhere. You can link it to https://apologeticsindex.org/2694-watching-out-for-watchman-nee

This article was written by G. Richard Fisher, a member of the Board of Directors of Personal Freedom Outreach (PFO) — a ministry that educates Christians about the dangers and heretical doctrines of religious cults.

Fisher is the senior researcher/writer for PFO’s The Quarterly Journal.  Pastor Fisher served as pastor of Laurelton Park Baptist Church in Bricktown, N.J., for over 40 years, from 1968 until his retirement in June 2009.  He also was part of the teaching staff at Central Jersey Bible Institute for over three decades, where he had served as Dean of the school.