A serious threat to the Church: Self-proclaimed ‘apostles’ and ‘prophets’

The following is an excerpt from the Introduction of Wandering Stars: Contending for the Faith with the New Apostles and Prophets, by Keith Gibson.

From the time of Montanus in the mid-second century to the present their have always been those within the church who have claimed to be prophets. That is nothing new. Even in the modern era, there have been a number of people who claimed prophetic gifts since the Azusa Street Revival in 1905. A few of these gathered substantial followings based largely on their perceived abilities to heal.

However beginning in the early 1980’s a significant change began to occur. An explosinon in the numbe of independent ministries based around prophetic gifting began. Many of these new prophetic ministers have now achieved superstar status within segments of the body of Christ. Schools to train prophets have been established and the church is witnessing a veritable explosion of prophetic activity. New doctrines are being written on an almost daily basis. Teachings and practices which the church has never held in all of her 2,000 year history are now commonplace.

Though no specific date can be given for the beginning of the prophetic movement, it began to emerge on a world-wide level in the 1980’s. In 1982, Micke Bickle began Kansas City Fellowship, the home of the controversial Kansas City Prophets. At the same time, other prophetic ministries were gaining prominence throughout the Church.

On Oct. 23, 1987, Bill Hamon hosted and sponsored the first “National Prophet’s Conference” with over 700 people in attendance.

Today the movement has literally thousands of adherents. At the time of this writing, the Elijah List, an email newsletter publishing the words of many of today’s new prophets, is received daily by over 130,000 people worldwide. The Identity Network, a similar prophetic email list is even larger, boasting a daily readership of over 150,000 people.

Emerging out of the Prophetic Movement, the Apostolic Movement began in earnest in the 1990’s. In 1999, In Singapore, a group of apostles gathered and laid the foundation for what was to become the International Coalition of Apostles (ICA). Shortly thereafter, C. Peter Wagner was asked to lead the group. This organization, which is perhaps the most visible arm of the New Apostolic Reformation, now boasts a membership of nearly 500 individuals all claiming apostolic status. These apostles claim to have been given their office, not merely on grace alone, but in response to their works for God. The ICA official definition states the following,

However an office, such as the office of apostle, is not given by grace alone, but given as a result of works that have demonstrated faithfulness in stewarding the gift.

Compare these words with those of the apostle Paul who stated:

For I am the least of the apostles, unworthy to be called an apostle, because I persecuted the church of God. But by the grace of God I am what I am — 1 Cor. 15:9-10

These new apostles do not claim to merely be in the apostolic succession and the guardians of apostolic truth. No, these new apostles claim to be even greater than the former apostles. As this book will demonstrate, they are claiming that the church cannot come to maturity and fulfill its mission apart from them. They are claiming authority over geographic regions and various marketplaces. They are mutually appointed and mutually affirming.

The issues occuring within the apostolic and prophetics movements are not peripheral. They affect nearly every central doctrine of the Christian faith. This is not by accident. Micke Bicle has stated that he had an encounter with God while in Egypt where he heard the “internal audible voice of God.’,

Suddenly the Lord gave me this sentence: ‘I am going to change the understanding and expression of Christianity in the earth in one generation.’

Rick Joyner in his book, A Prophetic Vision for the 21st Century, has made similar statements as have C. Peter Wagner and Bill Hamon. We will examine their claims throughout the book. But they are demanding a change, a new paradigm, new wineskins.

The majority of the Church has not taken seriously the claims of the modern apostles and prophets to be introducing a new paradigm into the Body of Christ. These claims are far from idle boasts. Indeed the paradigm shifts have already begun in many segments of Christianity. To say that the movement has grown rapidly would be a gross understatement.

The issues raised go far deeper than a mere debate over the cessation or continuation of spiritual gifts. Without intending to sound alarmist, it is the contention of this book that many of the statements and teachings of the leaders within this movement strike at the very heart of essential Christian doctrines and the nature of Christianity.

If the church does not respond to these issues, the Christian faith that we pass on to our children and grandchildren will bear little resemblance doctrinally to the historic faith.

Those within the prophetic movement are ready to battle the established church. Many have prophesied a coming Civil War within the Body of Christ. We will examine this in detail in later chapters but consider the words of Bickle as indicative of the milder form of this pronouncement,

The Lord says, ‘I will change.’ And I understood the emphasis of I, it will be sovereingly initiated. Thee King of Kings is orchestrating it, he says, ‘I will change.’ And when the Lord says, ‘I’m gonna change the synagogue system to an early church with fishermen,,,’ I’m telling you when power bases shift, if it happens in political arenas they call in Revolution. It’s called a Revolution. If it happens in the Spiritual arena, Conflict.

Bickle continues in this vein by saying,

I’ve cared enough about that word change. to study political and spiritual changes throughout history, and I’m telling you that they are bloody, they are hurtful, it is not a pretty sight to the flesh. But the Lord says, ‘I am changing.’ And the world changing is the scary part.

The purpose of this book will be to examine this movement and many of the associated teachings and phenomena in the light of Biblical revelation. When this is done we believe the readers will agree that the new apostolic and prophetic movement poses a serious threat to the doctrional integrity of the Church.

Read our Review of Wandering Stars: Contending for the Faith with the New Apostles and Prophets

© Copyright 2011 Keith Gibson. The above text is quoted by permission from Wandering Stars: Contending for the Faith with the New Apostles and Prophets, by Keith Gibson.

Do not repost this material without express, written permission from Keith Gibson. 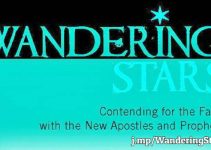