Modern-day Apostles and Prophets: and examination

In recent years the Christian Church has seen an explosion of independent ministries led by men and women claiming to speak and act with apostolic and prophetic authority.

These new ‘apostles’ and ‘prophets’ preach that the Church must come under their authority and direction in order to fulfil her end-time purpose.

A number of ministers within the apostolic and prophetic movement have achieved superstar status with segments of the Body of Christ — even though many of their statements and teachings strike at the very heart of essential Christian doctrine and the nature of Christianity.

As a result new doctrines and practices are being introduced into the Body of believers at an alarming rate. Teachings and practices which the church has never held in all of her 2,000 year history are now commonplace.

That is the premise of Wandering Stars: Contending for the Faith with the New Apostles and Prophets, a book written by pastor and Christian apologist Keith Gibson.

Gibson says the purpose of his book is to examine this new movement and many of the associated teachings and phenomena in light of Biblical revelation. When this his done, he believes the readers will agree that the new apostolic and prophetic movement poses a serious threat to the doctrinal integrity of the church.

From the outset Gibson makes clear that this is not a ‘Charismatic vs. Non-Charismatic’ issue, saying he believes that when the issues are carefully examined “all members of the Church, regardless of their stripe or particular view of spiritual gifts, will find cause for concern.”

Indeed the book shows that Gibson made sure he took a balanced approach, using sources from a variety of Christian backgrounds — including recognized Charismatic and Pentecostal leaders — to demonstrate that “the modern apostolic and prophetic movement must be considered heretical even by believers who believe in the continuation of the gifts.

Gibson also points out that he does not question the sincerity or Christianity of many of those involved in the movement, but rather their doctrines and practices.

Further evidence of his balanced approach is shown by the fact that the author resisted the tempation to pull out the most outlandish quotes in an attempt to make his point more forcefully.

That said, the book is well-documented with — by way of the End Notes — verifiable quotes.

A book like this could easily have turned into merely a catalog of unsound theology, outrageous claims and outlandish behavior. Instead, Gibson not only clearly identifies the problems with the teachings and practices of the new apostles and prophets, but provides a Biblical response at every turn.

Gibson demonstrates that the teachings of these apostles and prophets establish new doctrines, while at the same time showing that the logical and practical ramifications of much of their teaching is that today the Bible is no longer a sufficient guide for faith and practice.

He charitably says that not all of these ministers appear to be aware that they are doing this. However, by demoting the Bible to ‘old love letters’ that are superseded by new revelations, these preachers assure that their followers lack the very tool Scripture says believers should use to evaluate all teachings.

After examining what these ministers preach, Gibson concludes:

The doctrine of the new apostolic and prophetic movement diminishes God rather than exalting Him. The theology of this movement is utterly man-centered. The portrait of God being painted by the modern apostles and prophets simply does not fit with the revelation of God given in the Bible.

God can’t even protect what He has in heaven sufficiently to keep both demons and unbelieving men from stealing it away. He can’s protect His promises sufficiently to keep them from being hijacker by the Devil. He is unable to answer prayer unless men have given Him the power to do so. He can’t save unless men clear the heavens of demonic being so the gospel can bear fruit.

Such a God is hardly worthy of worship.
– Source: Wandering Stars, p. 156

In his Introduction Gibson says that “while a book of this kind is by its very nature polemical, I will attempt to be even-handed and charitable in dealing with the matter, though it is doubtful that any of the ministries critiqued will believe that this objective has been accomplished.”

Read an excerpt from Wandering Stars

Indeed, many of today’s ‘prophets’ and ‘apostles’ — and, often, their followers as well — are quick to denounce those who examine and/or reject their prophecies, visions, teachings and practices as ‘Pharisees,’ or people burdened with a ‘religious spirit.’

Gibson — who has spent countless hours reading the writings and listening to the sermons of the prophets he writes about — notes this attitude, saying that the

effort to demonize and disparage followers of Jesus with whom they disagree is rampant within the prophetic community. In their writings and messages they rarely giver believers who will not join their ranks the benefit of the doubt that they are convicted by the desire to be faithful to the Word of God as they understand it. No, almost without exception, believers who will not follow the modern prophets are depicted as prideful, dead, demonized or some equally distasteful category.

Members of this movement like to claim a persecuted status whenever anyone dares to challenge them in regard to their false doctrines and extra-biblical practices. But the fact is that while they talk of unity, their writings and messages contain a great deal of venom and disdain toward the rest of the Body of Christ.
– Source: Wandering Stars, pp. 203,204

In the book’s introductory chapter — titled, for good reason, ‘Do Not Skip This Section’ — Gibson explains that all the ministries he refers to are national in scale. [‘National’ refers to the USA, but Christians around the world are familiar with most, if not all of the ministers mentioned.]

I have attempted to reference a large variety of the teachers within the apostolic/prophetic community in order to demonstrate that the issues of concern do not center around one or two errant ministries but rather span the gamut of the movement. However, having said that, certain ministries are definitely more prominent that others and therefore warrant fuller inspection.
– Source: Wandering Stars, p. 12

Hence the teachings of such leading figures as Rick Joyner, Mike Bickle, and Bob Jones are closely examined.

Wandering Stars is a much-needed corrective. It is an important book that clearly identifies the huge theological problems introduced by the new apostles and prophets — ranging from aberrant teachings to heretical doctrines.

See also our extensive entry on the New Apostolic Reformation

Gibson knows his stuff, having thoroughly studied the source material. Familiar with much of it myself I came away with a clearer understanding of the issues involved — as well as a better overall picture of where this movement came from, and where it is headed.

The book is well-written and easy to read. It includes two appendices: Patron Saints of the Prophetic, and The Occultic Mindset of Spiritual Warfare.

The book’s title came from Scripture:

Beloved, while I was very diligent to write to you concerening our common salvation, I found it necessary to write to you exhorting you to contend earnestly for the faith which was once for all delivered to the saints. For certain men have crept in unnoticed, who long ago were marked out for this condemnation, ungodly men, who turn the grace of God into lewdness and deny the only Lord God and Our Lord Jesus Christ… These are WANDERING STARS for whom is reserved the blackness of darkness forever.
– Source: Jude, 3-4, 12 — emphasis added.

Keith Gibson is the founding pastor of Word of Life Community Church in in Grandview, MO., and he is one of the Directors of the Apologetics Resource Center (ARC).

In his foreword Craig Branch, the Director of ARC, says that Gibson’s dual calling provide him with a healthy blend of sound doctrine (and correcting heresy, 1 Tim. 1:3-7), and its application in shepherding the flock:

Our ministry works closely, arm in arm, cross denominationally so we have a working knowledge of flexibility within the symphonic theology of the Church. As the expression goes, “we major on the majors and minor on the minors.”

But there are lines of heresy and the closer one gets to those line, more damage occurs. This book addresses a growing movement that brings serious error inside the church.

Wandering Stars is a book that should be read by pastors, Christian apologists, other leaders and every one else interested in the subject. It will provide a good understanding of the issues surrounding the apostolic and prophetic movement, and equip the reader with an appropriate Biblical response to its teachings and practices.

For those who are already caught up in this movement it may well be a difficult book to read. Nevertheless we highly recommend doing so. The Bible says, “Do not quench the Spirit; do not despise prophetic utterances. But examine everything carefully; hold fast to that which is good; abstain from every form of evil.” – 1 Thessalonians 5:19-22.

Read an excerpt: New apostles and prophets pose a serious treat to the Church

This review was written by Anton Hein, founder and team member of Apologetics Index. 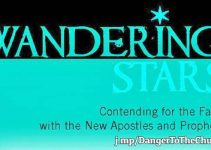