Home
Cults
Who Joins Cults, And Why?
Table of Contents hide
1 Are certain types of people more likely to join a cult?
2 Predisposing factors may facilitate attraction to a cultic system
3 Anyone may be drawn in by a cult’s appeal
4 people who join cults are not stupid

Are certain types of people more likely to join a cult?

Individual vulnerability factors matter much more than personality type when it comes to joining or staying in a cult or abusive relationship.

“Everyone is influenced and persuaded daily in various ways,” writes the late Margaret Singer, “but the vulnerability to influence varies. The ability to fend off persuaders is reduced when one is rushed, stressed, uncertain, lonely, indifferent, uninformed, distracted, or fatigued…. Also affecting vulnerability are the status and power of the persuader….

No one type of person is prone to become involved with cults. About two-thirds of those studied have been normal young persons induced to join groups in periods of personal crisis, [such as] broken romance or failures to get the job or college of their choice. Vulnerable, the young person affiliates with a cult offering promises of unconditional love, new mental powers, and social utopia.

Since modern cults are persistent and often deceptive in their recruiting, many prospective group members have no accurate knowledge of the cult and almost no understanding of what eventually will be expected of them as long-term members.” 1

Many cults have flourished in recent decades, and changes in recruitment styles and targets have occurred. In the 1970s and early ’80s, primarily young adults, either in college or some other life transition, joined these groups. At that time, cults were extremely active (and some still are) on college campuses and in places where young people congregate.

Today, however, increasing numbers of people in their late twenties and older are joining cult groups or getting involved in abusive relationships.

In fact, the majority of inquiries to cult information resources involve new recruits or adherents who are in their thirties to fifties, or even sixties. Still no single personality profile characterizes cult members. 2

Predisposing factors may facilitate attraction to a cultic system

Most experts agree, though, that whether the joiner is young or old, certain predisposing factors may facilitate attraction to a cultic system, the success of recruitment and indoctrination efforts, and the length and depth of involvement. These factors include:

A wide range of human susceptibility emerges when we combine the list of predisposing factors with the potential vulnerabilities mentioned above. The stereotype of a recruit is a young person worried about leaving college or uncertain about “facing life.”

Anyone may be drawn in by a cult’s appeal

The reality, however, is that anyone, at any age — in a moment of confusion, personal crisis, or simply a life transition — may become attracted to or drawn in by a cult’s appeal.

“New in town, lost a job, recently divorced, a friend or family member just died, need a career change, feel a little blue?” The unstable and anxious feelings experienced at such times make a person vulnerable, whether that person is twenty or seventy years old.

If a vulnerable person happens to cross paths with a cult advertisement or personal recruiter putting forth even a mildly interesting offer, then that ad will likely pay for itself and that recruiter will stand a good chance of making her mark.

According to Michael Langone, “Conversion to cults is not truly a matter of choice. Vulnerabilities do not merely “lead’ individuals to a particular group. The group manipulates these vulnerabilities and deceives prospects in order to persuade them to join and, ultimately, renounce their old lives.” 4

people who join cults are not stupid

While we are at it, let’s shatter another myth: people who join cults are not stupid, weird, crazy, weak-willed, or neurotic. Most cult members are of above-average intelligence, well adjusted, adaptable, and perhaps a bit idealistic. In relatively few cases is there a history of a pre-existing mental disorder.

Anyone is capable of being recruited (or seduced) into a cult if his personal and situational circumstances are right. Currently there are so many cults formed around so many different types of beliefs that it is impossible for a person to truthfully claim that he would never be vulnerable to a cult’s appeal.

Cult recruitment is not mysterious. It is as simple and commonplace as the seduction and persuasion processes used by lovers and advertisers. However, depending on the degree of deception and manipulation involved, the resultant attachments can be even more powerful. 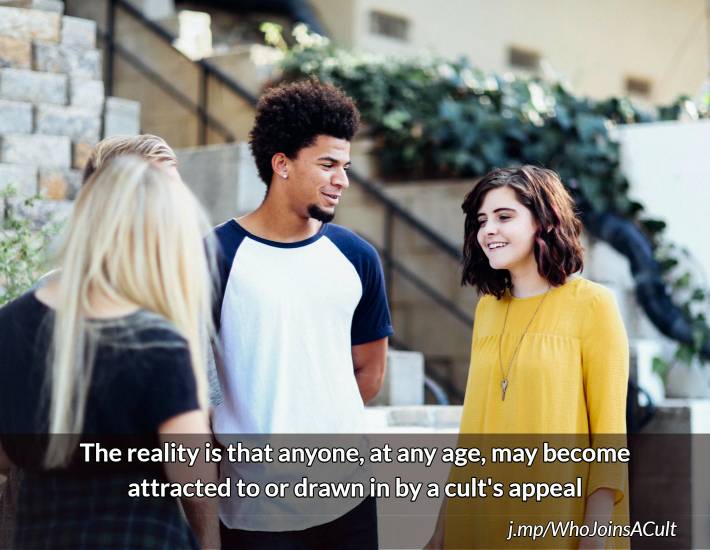 Is there a certain type of person who is more likely to join a cult? You are welcome to post this graphic on your blog, website, or social media

This copyrighted article has been excerpted from Take Back Your Life: Recovering from Cults and Abusive Relationships by Janja Lalich and Madeleine Tobias (Bay Tree Publishing). It is posted at Apologetics Index by permission. 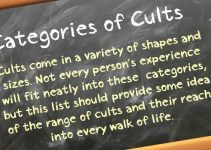 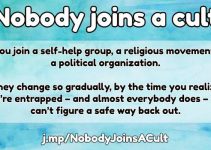