Among the topics we focus on at Apologetics Index is the issue of spiritual abuse.

Jeff VanVonderen, co-author of the book The Subtle Power of Spiritual Abuse, says “Spiritual abuse occurs when someone in a position of spiritual authority … misuses that authority placing themselves over God’s people to control, coerce or manipulate them for seemingly Godly purposes which are really their own.” 1

VanVonderen notes that the true purpose of spiritual authority is instead to “”come underneath’ and serve, build, equip and make God’s people MORE free.”

In our experience many Christians unwittingly get caught up in abusive churches — or relationships — in which they are subjected to spiritual abuse. Most of them had been unaware of the danger signs. The old maxim, ‘forewarned is forearmed’ applies here.

The Heresy of Mind Control

We recently added another resource to the ‘online books‘ section on that page — a link to a book titled, The Heresy of Mind Control: Recognizing Con Artists, Tyrants, and Spiritual Abusers in Leadership

The book was written by Stephen Martin, who has been a Workshop Leader for clients at Wellspring Retreat and Resource Center in Athens, Ohio. Wellspring is a rehabilitation center for former members of cults and those who have been subjected to other forms of spiritual abuse. Stephen has also conducted education programs about spiritual abuse and cultic mind control. He received his Master of Divinity degree from Nazarene Theological Seminary in 1983.

The book is out of print, but you can order a printed copy directly from the author. Occasionally second-hand printed copies of the book can be ordered via Amazon.com.

From the book’s Introduction:

Suppose you move to a different area, and are keeping your eyes open for a good group to belong to (a social club, a church, a synagogue, or service organization). You visit one such group where the people are very friendly, loving, and give you individual attention. The group has a variety of programs: a rehabilitation program for drug addicts, services and nursing homes for the elderly, help for the poor, and free clinics. The leader inspires the disillusioned, the disenchanted, and those who have been rejected elsewhere. He is well-known and respected in the area, and the mayor gave him a position as Director of the City Housing Authority. Would you join this group? 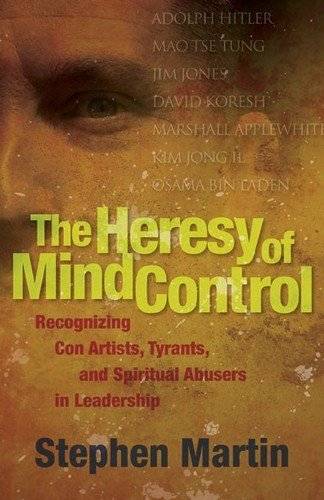 Suppose you spend four years in college and nearly two years in graduate school to prepare for a career in Christian music. Then the ministers of your home church tell you that you are not needed in their music program. Shortly afterward, you find a new group that welcomes you with open arms. They really care for people. The leader of this group has fascinating Bible studies. You and everyone else are able to sit and listen to him for several hours at a time. Would you stay in this group?

If you answered “yes” to the first situation, you joined the church led by Jim Jones who led over 900 of his followers into a mass suicide murder.

If you liked the second group, you became a follower of David Koresh who led over 80 of his followers to die in a blaze of fire.

A wolf in sheep’s clothing is a short and simple description of a cult leader — as these men were.

Are there any warning signs that a group and its leader are dangerous? That’s largely what this book is about.

One reason that many do not realize they are in a cult is because very little education exists about the nature of mind control or brainwashing. This book is one that helps to fill the void.

If we don’t recognize our vulnerabilities, it can lead us to the assumption that we can’t be deceived and eventually manipulated through a brainwashing process. We can be unaware of the subtle process that can pull us into a harmful group unwittingly. So many simply believe that it is some other poor “sap” that gets suckered into a cult.

What is a cult?

The word cult, to many people, brings up the idea of “unorthodox belief” or “heresy.” Others think of “mind control” or “brainwashing.” Both concepts are correct. Additional terms such as “totalitarianism” (or “totalism”), “authoritarianism,” “spiritual abuse,” and “abusive churches” are also included in the entire cult phenomenon and involve mind control as well.

In general, correct belief is considered of high importance in churches. What is op equal importance is how groups, churches, and their leaders treat people. Whereas unorthodox doctrine can be labeled as heresy of belief, this book will focus on a heresy of practice — namely mind control.
– Source: Stephen Martin, The Heresy of Mind Control: Recognizing Con Artists, Tyrants, and Spiritual Abusers in Leadership

Do not fall victim to dubious cult experts.

Anyone can call him- or herself a ‘cult expert’ regardless of ability, approach, or level of acceptance by recognized authorities in the field. 2

How to select a Cult Expert.