An Age of Religious Confusion

If we were seeking an appropriate label to describe the religious scene in the last three decades of the twentieth century, we would do well to consider it “the age of confusion.”

There are many different religions in the Western world, each seeking adherents. They range from traditional Christian groups to oriental religions, from spiritist and occult movements to more traditional Western cults. Within each of these there is a confusion of voices, each claiming to speak for the larger group. Rarely can a casual observer detect any clear agreement between these self-proclaimed leaders.

One wishes he could say that this same confusion did not exist in the evangelical community. After all, do not evangelicals agree that the Bible is the authority in doctrinal matters? Surely here we can find agreement and avoid the confusion that permeates the larger religious world around us.

We could hope that such confusion would not exist, but unfortunately it does. Here also it seems that “every man [says] that which seems right in his own eyes” (Judges 21:25b, paraphrased). True, there are areas of general agreement, some of them very important areas. But even here the agreement is often hidden in the confusion of different terms. Sometimes what seems to be agreement is, after careful examination, not what first appearances would lead one to think.

A Focus Within Religious Confusion

No doubt there are several reasons for this confusion. However, I believe the major sources can be groups under three interrelated problems: poor scholarship, biblical ignorance, and adherence to non-biblical philosophical positions. Such philosophical positions often go unrecognized by the person holding them, but they nevertheless function as the criteria by which Scripture is interpreted.

To help us clarify our thinking and avoid resultant problems, much needs to be said about each of these reasons. However, the topic of this book concerns the problems that result from accepting a non-biblical philosophical position. Even this is not a completely accurate statement. Rather, it is about the problems arising from accepting only one kind of non-Christian philosophy, namely mysticism.

These three causes of confusion are interrelated. Consequently, the examination of one of them will, to some degree, involve us in the examination of the other two. When evangelicals are guilty of interpreting the Bible and of developing doctrine under the influence of secular philosophies, they generally do so out of ignorance and poor biblical scholarship. As evangelicals, we must construct our philosophical structures in accordance with Scripture. This is part of what we mean when we claims the Bible as our final standard of truth.

No mater how good our intentions may be, when we fail in Scripture interpretation the results are tragic. Our ignorance of basic biblical structures leaves us open to the ever-present influence of the world’s thought patterns. When we begin to interpret the Word of God through these patterns, we inevitably distort it. Such distortion is always destructive (2 Peter 3:16). Some of the resultant problems from the church our our concern here.

A subtlety in Religious Confusion

Some special problems will face us as we attempt to understand today’s religious confusion. These are problems that are unique among the major difficulties facing Christianity today. This is because the distortions caused by mysticism have gained a great deal of respectability within the evangelical community. This, in turn, is partly due to a basic misunderstanding of what the Scriptures means when they speak of being “spiritual.”

Much of what has been taught about spirituality in general, and about the “deeper spiritual life” specifically, has its roots more deeply in medieval Catholic mysticism, and in the mystical experiences of more recent persons, that it has in Scripture. Being convinced by their own experiences that a mystical approach is valid, these persons have interpreted Scripture to fit. This often gives a meaning to the written Word that may be nearly the opposite of that intended by the Holy Spirit. Although much of this has been done by well-intentioned persons, the result has, nevertheless, been tragic in many cases.

Often Christians, finding themselves unable to meet the criteria set for them by these writers and speakers, carry a load of totally unjustified guilt. Some despair of ever meeting what they have been taught is God’s will for them. Others spend years in fruitless effort that should have been spent in profitable service. These are the results of the more mild forms of the error. More extreme cases have resulted in heresy and, sometimes, in powerful anti-Christian cults. The problem is not an unimportant one.

At the same time we mostly fail to meet he challenge from the modern secular world. Our failure is because, at least in large part, we are confused about what is the real heart of the issue. Young people who claim to be sincere Christians are attracted to cults of various kinds. Christian leaders find themselves unable “to give a logical defense” of the hope that is in us (1 Peter 3:15, Amplified New Testament).

When they do attempt to deal with the problem, they find themselves lost in a confusion of ideas they do not understand and, therefore, cannot handle adequately. The result is that their efforts are largely unsuccessful. They have been led to believe that a mystical approach is a legitimate aspect of true spirituality. Hence, they spend their time and efforts resisting surface errors in beliefs, while encouraging the very mysticism that is the root of the problem.

I do not mean for a moment that false doctrines and practices should not opposed. Quite the opposite. They must be resisted and exposed for what they are. If anything, we should probably do so with more vigor and wisdom than we do now.

The problem, however, is that if this is all we do we fail in two ways. First, we fail to get at the root of the problem. If the false doctrine springs from mysticism, it will likely be replaced by another error. Second, we often fail to understand correctly the error itself because the key issues are themselves not always what they appear to be. In that case, when we have done all we can, the root is as strong as ever. We may actually have encouraged the mysticism that is its basis. We have failed!

A Challenge to Religious Confusion

By now someone will be asking, “Just what is this thing you call mysticism? Can you support your charge that evangelical Christianity looks with favor on forms of mysticism that are dangerous?”

Theses are fair questions and present a valid challenge. I believe that the answer to the second will become clearer once we answer the first in chapter 1. Then, most of the following chapters will be dedicated to showing that the evangelical community today faces grave dangers from mysticism.

However, we will face something of a problem as we try to understand clearly just what mysticism is. No adequate vocabulary exists to define mysticism. Perhaps this helps explain why we have been so little aware of this issue.

Furthermore, the expressions of mysticism with which we are most concerned are rarely encountered in a pure form. What we most often see are attitudes and beliefs that result from what we may describe as low-grade mystical experiences. They are experiences that have the basic characteristics of all mystical experiences, but in a very mild form. Occasionally they share some, but not all, of the essential mystical characteristics. Whether such low-grade experiences should properly be called mystical at all is not our concern here. In the absence of a better term, mystical will serve our purpose. What is vital is that we recognize the implications of accepting such experiences as having validity and authority.

Let us begin by examining the pure mystical experience in order to see the problem clearly. Then applications to less dramatic cases can follow. 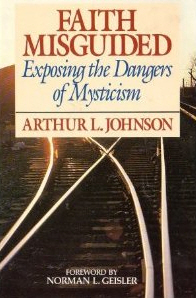 © 1988 by The Moody Bible Institute of Chicago. Posted at Apologetics Index by permission. [Details]

This material may not be re-published, either online or offline, without the express permission — in writing — by the author.

Printed Copy of Faith Misguided: Exposing the Dangers of Mysticism

While Faith Misguided: Exposing the Dangers of Mysticism is currently out of print, second-hand copies may still be available via booksellers such as Amazon.com.

Meanwhile the publisher, Moody Publishers, is considering reprinting the book. Should the book indeed be republished we will announce it at this web site.