Having been around this list* for a few years now, it is always interesting to observe some of the discussions that go on. They usually come down two or a few individuals endlessly driving their point of view to each other, without any possibility of the discussion changing each other. This might seem to be a wasted exercise in futility for each, but then we must realize that this discussion, or more properly debate, is being observed by hundreds, if not thousands, of others, who may be heavily influenced by the thoughts expressed. In this sense, then, the debate is far from futile, offering the opportunity to present arguments to this great cloud of judges, or jury, or witnesses.

Because of this, it then becomes very important, especially since this is supposed to be a Christian list, that those representing the Christian doctrines of the Bible against those who would attempt to change or confuse the understanding of the folks that are just lurking here. It is my attempt here to appeal to those of you who may be reluctant to post, or who just like to read, for the clear understanding of the Bible that supports the doctrine that **Jesus is God**. This is not about an intellectual exercise in Greek debate, but in retaining the basic tenets of the Christian faith. As such, I would like to make a few statements on the purpose and importance of the doctrine of the Holy Trinity.

When it comes right down to it, one of the most essential doctrines of the Christian faith is that Jesus is God. This has been clearly expressed throughout the New Testament. As we review the writings of Paul, we see these doctrines clearly expressed in several of his letters, particularly Galatians, Philippians and Colossians. If we remember Paul’s role in the early history of the church, he was the primary missionary who took the message of the gospel to Gentile lands. Most of his letters are written in response to problems that developed at churches that he had founded. In general, they do not so much present the complete teaching that he probably took to those churches. Most were written in response to errors that were reported in some way to him, to make sure that these churches retained correct doctrine. The exceptions to this would be Romans, which probably is a good representation of the basic message he preached in new churches, and the pastoral epistles.

The key, though, for this discussion is the errors that he was writing to correct. In each of these letters he felt it was necessary to present a clear statement of the deity of Christ. This was in response to outsiders, deceivers, that sought to corrupt the simple message of the gospel, and to add requirements to it. One of the most common errors being taught is that Jesus is not God, or not man, or is lacking in some critical element of either. The correction clearly states that Jesus is fully man and fully God, and that both natures are critical to His role in the redemption of mankind. The important point, though, is the emphasis on the intent of the deceivers, which was to draw these new believers away from the joy of their faith.

This same theme is carried through the book of Hebrews, where the writer begins by making a clear statement of Jesus’ deity, and follows with a clear differentiation between Jesus and all created beings, showing that Jesus is superior. Chapter 2 begins with the statement warning us not to drift away by ignoring the things stated about Jesus, and instead trusting to angels. This warning was issued to believers for the same reason that Paul delivered the message, people were coming to those who had believed and confusing the message of the gospel, and were being led away from knowing Jesus as God.

It is also interesting to look at the Gospels. The synoptics were already available when John saw the need to write one more gospel. Each of the synoptics had presented a particular aspect of the work of Jesus in His earthly ministry. But while these gospels had been written, again there were deceivers who were spreading a different gospel, a gospel presented on Jesus as a created being, but not God. Much later, probably after Paul had written all of his epistles, John felt it necessary to present the deity of Jesus indisputably. Why? Because again there were people who were arguing against the deity of Christ.

All through the history of the early church, doctrines developed that presented views of Jesus that were contrary to that presented by the apostles and by Jesus Himself. The confusion was not only creating controversy in the church, but was making it difficult for people to know what to believe it meant to be Christian. The development of church doctrines, at least in the early church, was necessary to provide clear statements of exactly what the Bible had to say about various issues, and particularly about the nature of God. They are not developed to change or add to the Bible, but to make the teaching of the Bible clear to all.

Neither of these conclusions was novel, they were simply a restatement of what the church had believed since the day of Pentecost. In these two statements, the nature of the heresy of the Monarchians, Docetists, Gnostics and others was clearly revealed. None agreed with these statements about the nature of Christ completely. Those with a true heart to put their faith in God now had a clear statement of the nature and personality of the God of their faith.

I am the first to acknowledge that this doctrine is unfathomable in reality, and describable only in concept. We must remember that we are a finite people that serve an infinite God. It is impossible for the finite to comprehend the infinite completely. But each of these characteristics of God/Jesus is clearly revealed both in scripture and tradition. Is it so hard for us, the finite, to acknowledge that we might not be able to understand all there is to know about God? Or how it might not be possible to describe the Holy Trinity within our finite understanding of reality? Are we so puffed up as to question what God has revealed to us?

Understand this, I do not believe it is necessary to confess the Trinitarian nature of God in order to believe the gospel in faith. We can be saved without a clear concept of the trinity. If the basic considerations of these doctrines were not true, however, then our redemption would not be possible, and the Gospel of Jesus Christ would be a lie. Mark clearly presented the passages that demonstrate the personhood of each member of the Holy Trinity, and the clear statements that God is one. In this definition then Jesus must be God. It is also clearly presented that Jesus was in every way a man, born of a human woman. Both of these facts are necessary for our redemption. Simply stated, if Jesus were not a man, then He could not have represented us on the cross. If He were a created being, His death would have had no more power to salvation that the death of any other created being. He must be God in order to provide the release from the curse of the law, and to provide us the hope of our salvation. This gives us a new life both in eternity, and in the present time.

Since the time of Jesus until this time, men have come forward to present a different Jesus than the Jesus of the Bible. In order to do this, they must distort the nature of Jesus, denying either His complete humanity or His complete Deity. What we have on this list is just one of these deceptions. For reasons unstated there are those who try to convince us with fine sounding arguments that there is no Trinity, and that Jesus is not God. Just like the last 2,000 (almost) years.

I make my argument not to those who debate against divine nature of Jesus, but to you who may have been caused to question what they believe, or possibly doubt that Jesus has the power to save them, so that you might strengthen your faith in Him. It grieves me to the depths of my soul to see Jesus’ nature denied in such “fine sounding arguments”. As Paul clearly stated in Colossians:

(Col 2:4 NIV) I tell you this so that no one may deceive you by fine-sounding arguments. 5 For though I am absent from you in body, I am present with you in spirit and delight to see how orderly you are and how firm your faith in Christ is. 6 So then, just as you received Christ Jesus as Lord, continue to live in him, 7 rooted and built up in him, strengthened in the faith as you were taught, and overflowing with thankfulness. 8 See to it that no one takes you captive through hollow and deceptive philosophy, which depends on human tradition and the basic principles of this world rather than on Christ. 9 For in Christ all the fullness of the Deity lives in bodily form, 10 and you have been given fullness in Christ, who is the head over every power and authority.

Read that verse 9 again, all the fullness of God in bodily form. This is the Lord Jesus we serve, not a created being. My prayer for all of you is the same as Paul’s, that the Holy Spirit that is in you would reveal all truth about who Jesus is and the nature of God, that you might live in the full confidence of your faith in the hope that Jesus brings.

With the love of Jesus,

* This article was originally posted to a Christian discussion list as part of a discussion about the doctrine of the Trinity. 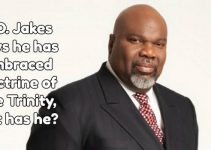