In response to the ongoing series of preventable deaths in the Followers of Christ church sect, the Oregon House on March 10, 2011 approved a bill that would remove legal protection for parents who choose faith healing over medical intervention when treating their children.

House Bill 2721 “Eliminates reliance on spiritual treatment as defense to certain crimes in which victim is under 18 years of age.”

Some question whether such a law limits religious freedom — suggesting that any such limits are unconstitutional (from an American point of view).

What the case demonstrates, in ultrabold print, is that no conversation about religious rights is complete without equal attention to responsibilities — responsibilities to the community that all religious practitioners bear, and that the Oregon City church has failed miserably to uphold.[…]

Religious freedom is not the only right at stake in the crowded public square. And a religion cannot reasonably expect the public and the law to respect its idiosyncratic ways when it fails to live up to the community’s well-considered standards — such as the idea that children should receive basic medical care when their lives are at stake.

Responsibility is essentially what the Oregon Legislature is imposing on the Followers of Christ. Whereas the Followers had previously enjoyed protection from manslaughter prosecution in cases where children died for lack of medical care, the new law means parents can no longer invoke religious freedom in their defense. An earnest attempt to heal children spiritually — however sincere the belief it will work — will no longer be enough in the eyes of the law. (The legislation stops short, as it should, from forbidding adult Followers themselves from relying solely on faith healing.)

Couldn’t this be seen as an assault on the Followers’ constitutionally protected freedom of religion? A cursory glance might suggest “yes,” but a more complex view of the situation, and of long-standing Supreme Court jurisprudence, leads to this realization: While freedom of religious belief is absolute, the acting out of said freedom is not — and, in truth, cannot be if a pluralistic society is going to avoid chaos.

The legal distinction between religious belief and action dates to the Mormon polygamy cases of the 19th century, explains Steven Green, a law professor and director of Willamette University’s Center for Religion, Law and Democracy. If you’ve taken a religious history class, you might know the story: The continued practice of polygamy — then held by Mormons as crucial to their eternal salvation — stood at the center of a fierce conflict between the Mormon church and U.S. government in the latter decades of the 1800s, effectively blocking Utah from statehood and forcing prominent Mormons into hiding or prison. Via the Great Accommodation of 1890, the church surrendered polygamy, paving the way to Utah statehood and the broader acceptance of Mormonism into the mainstream of American life.

In an 1878 decision on the Mormons and polygamy, the Supreme Court held– much like Oregon’s Legislature today — that religious freedom could not justify (otherwise) criminal activity. If it could, the court reasoned, what would stop a church from practicing human sacrifice?
[…]

The freedom to believe as one chooses is crucial to the American way, and belief has little meaning if it cannot be acted upon. Even so, as the Followers of Christ are learning the hard way, the right to practice religion must have its limits. Especially when the consequences are life or death for those with no choice in the matter.
– Source: Tom Krattenmaker, Even religious freedom has limits, USA Today, March 27, 2011 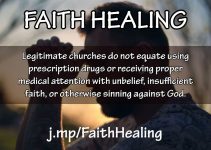 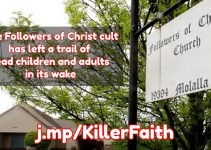