Next page: Followers of Christ — Religious Freedom versus Responsibilities

The Followers of Christ church — a religious cult whose unbiblical, deadly faith healing practices continues to leave a trail of dead children — is still [2020] in the news.

Members believe that even preventable deaths are the result of God’s will. Medical intervention is seen as going against the will of God. Medicines are viewed as the product of Satan.

No one called for a doctor, and they died of infection, pneumonia, seizures, heart defects and other problems, according to coroner’s reports and law enforcement documents.

And they died while their parents avoided seeking medical care because they practice faith healing.

In the past five years, according to the reports, 11 Canyon County children died (including stillborn deaths) while no effort was made to get medical help. Instead, the parents prayed.

In that same time frame, Ada County — which has a population more than double that of Canyon County’s — had no children die as a result of faith healing.

Owyhee County, an area that’s home to not quite 12,000 people, saw two faith healing-related deaths in the past five years.

The Idaho Statesman requested coroner’s reports from Canyon, Owyhee and Ada counties for all juveniles who died of natural causes and had unattended deaths, meaning they were not in the care of a physician.

A “natural” cause of death on a coroner’s report means the death was not an accident, a homicide or a suicide. “Natural” does not mean the death was unavoidable.

Cases involving the deaths of children and infants were outlined in the county documents — and some of the deaths might have been prevented had parents sought medical help.

HOW’D THEY DIE? REPORTS SPELL IT OUT

The reports from coroners paint a picture of some of the children suffering and dying in situations in which medical care could make a difference. […]
– Source: Ruth Brown, Faith healing and Idaho law: In the past five years, 13 children died while their parents relied on faith and rejected medical care, Lewiston Tribune, February 17, 2020 [Link shows web archive version]

Seven sets of Oregon parents who believe in faith-healing have faced criminal charges in the death or illness of their children in the last decade, but the most recent case carries the harshest accusation yet: murder.

Sarah, 24, and Travis Mitchell, 21, have been held in jail without bail since June 5 pending trial on charges of murder and first-degree criminal mistreatment. Their twin daughter, Ginnifer, died in March. The other twin girl survived after a medical examiner and Oregon City police officers urged family members to take her to the hospital.

The couple could face life in prison if convicted. They have pleaded not guilty to their charges.

The circumstances of their daughter’s death parallel what happened eight years earlier when Sarah Mitchell’s sister also gave birth and her son died. […]

Oregon once had broad faith-healing exemptions, said James Oleske, an associate law professor at Lewis & Clark Law School and an expert on religion and law. But lawmakers have since cracked down, including removing spiritual treatment as a defense for all homicide charges in 2011.
– Source: Murder case against faith-healing parents hinges on question of ‘recklessness’, The Oregonian, July 2, 2017

In Idaho, parents are allowed by law to shield their children from medical care, even when faced with potentially life-threatening illnesses or injuries, in lieu of prayer or faith-healing.

Idaho is one of six states in the U.S. where religious exemptions are allowed in the deaths of minor children, protecting parents from possible negligent homicide charges. This means if a child dies because they weren’t treated with medicine, the parents are not legally held responsible.

One local religious group that eschews most forms of modern medicine is the Followers of Christ.

A former member of the church tells KTVB that because prayer is the only remedy used in the church, children are suffering and dying of preventable and curable ailments.
[…]

KTVB obtained over a dozen autopsy reports from children of Followers of Christ members that have died since the early 2000s. Causes of death in those reports included flu-like symptoms, food poisoning, pneumonia, and still births. […]

The Idaho Legislature has been challenged on the issue of faith-healing since passing religious shield laws that protected parents who objected to medical treatment in the early 1970’s.

Over the last decade bills have been drafted to repeal those laws by several state senators and representatives, but none of them ultimately received hearings. […]
– Source: Joe Parris, KTVB, Canyon County sheriff, coroner bring opposing views to faith-healing debate, February 26, 2017

The majority of Followers of Christ members are located in Oregon, a state that did eventually take legislative action to prevent faith healing-related child abuse.

On March 10, 2011, the Oregon House approved a bill that would remove legal protection for parents who choose faith healing over medical intervention when treating their children. [The bill was signed by the Governor, and went into effect, on June 9, 2011]

The legislation comes in response to an Oregon City church, the Followers of Christ, that has a long history of child deaths even though the conditions from which the children died were medically treatable.

The church’s extreme faith healing beliefs and practices have left a trail of dead children in its wake.

Members who — usually in secret — see a physician or use medicines are shunned.

A Cult, both theologically and sociologically

The church is considered to be a cult, both theologically and sociologically. Theologically Followers of Christ Church is a cult of Christianity.

The church was founded in the early 20th century by the Reverend Walter White, a preacher who led a congregation which broke away from a Kansas church of the same name in the 1940s. White died in 1969, and the church has functioned without a minister since then.

Former church members say White was a prophet with a tyrannical side. From his pulpit he would rebuke congregation members, often making them stand and confess their misdeeds to the entire group. He captivated his congregation with powerful sermons, often slamming his Bible to the floor, shaking and clapping, and speaking in tongues.

“Walter became a Christlike figure,” said one former member who asked not to be identified. “People believed the only way to get to God was through Walter White.”
– Source: Followers’ roots reveal numerous splinters, Mark Larabee and Peter D. Sleeth, The Oregonian, July 6, 1998

The Followers of Christ Church is not affiliated with other churches that use the same name. But splinter groups of the church are found in Oklahoma and Idaho.

Ex-member Suzi Shumaker — who was born into the Followers of Christ Church in 1973 and was an active member until 1994 — writes in her blog:

Nobody can join our church; the way in is through the direct descent of one of the people the church’s primary prophet, Walter White, had baptized before his death in the 1960’s.

I don’t know the reason for most of the rules and practices, except that we are God’s chosen people. We are the only people on the planet who follow God’s word. Every other church is practicing “false prophesy.”

In 2008 an ex-member who remained in touch with some of the church members estimated membership to be at 2,300.

A series by the Oregonian newspaper announced that of 78 minors buried in the graveyard over 35 years, 21 “probably would have lived with medical intervention, often as simple as antibiotics.” If so, the cemetery may represent one of the largest concentrations of faith-healing-related fatalities in decades.
– Source: Faith Or Healing? David van Biema and Dan Kray, TIME, Aug. 31, 2998

Former Followers of Christ Church member advises: Just Get Out 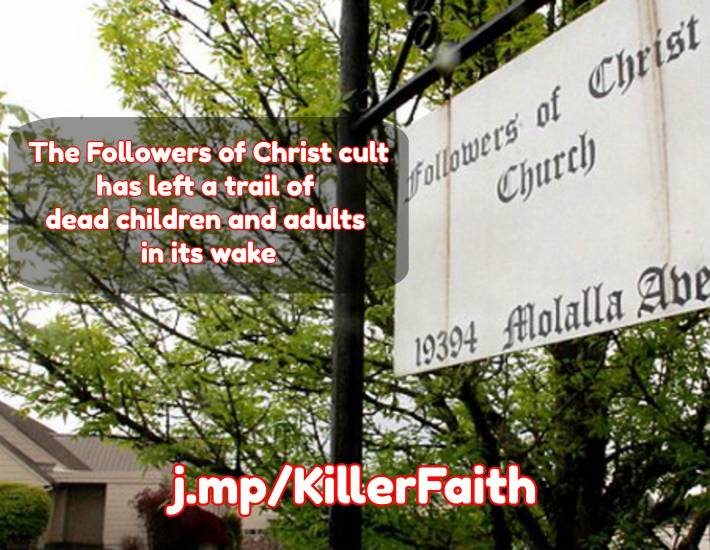 Next page: Followers of Christ — Religious Freedom versus Responsibilities