Former shoemaker and former fundamentalist Christian preacher John de Ruiter is a Canadian author and philosopher considered by some to be a cult gury. His new-age philosphies are marketed by his company, Oasis Edmonton Inc. The company built the Oasis Conference Centre in Edmonton, Alberta, Canada. It is the home of De Ruiter’s “College of Integrated Philosophy.”

De Ruiter travels around the world, conducting meetings in Denmark, Germany, India, Israel, and other countries.

People also travel from around the world travel to the college in Edmonton, where they attend three-hour meetings that are conducted largely in silence, with long periods of intense gazing toward the front of the room.

Though he also offers podcasts and live streams, most people want to make eye contact with John de Ruiter, who sits on the stage and stares.

He claims to be the “living embodiment of truth.” According to court documents he has also claimed to be “Christ on earth” — a blasphemous delusion. 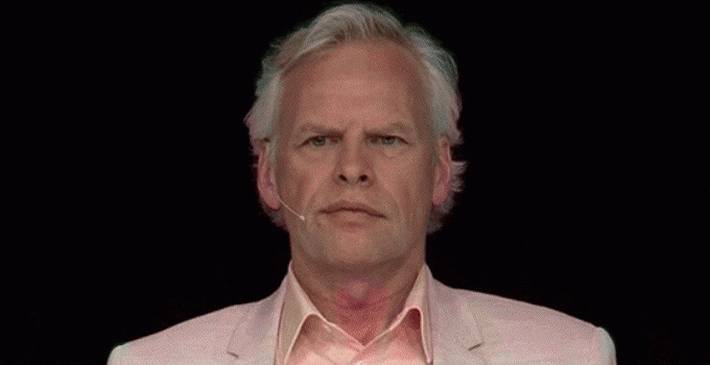 John de Ruiter used to be a shoemaker in Edmonton. Now people come from all over the world to hear him preach his New Age gospel or just to be near him. Some even call him the Second Coming of Christ. Native groups call him the “lost white brother.”

Stephen Kent, a University of Alberta professor who specializes in cults and new religions, accompanied a National Post reporter to a weekend session with Mr. De Ruiter. “This is the beginning of a new religion,” Prof. Kent says. “This is how they start.”
– Source: Shoemaker to Messiah? National Post, Canada, Dec. 7, 1998

Only five years ago, John de Ruiter was still preaching the Christian Gospel to a handful of friends inside a small bungalow he shared with his wife and three children in Edmonton’s east end. But, gradually, his message changed. His references to Jesus stopped as he developed his own peculiar religion, a confusing mix of mysticism, empty rhetoric, and group therapy. He now dismisses critical thought and, aside from his own authority, leaves everything open to question. “If you were to follow me,” he teaches, “all I would teach you and show you is how to be compassionate. . . . You would learn to lay your head down inside, warmly, in the midst of anything. . . . You would always acquiesce. You would never, under any kind of pressure, kick or fuss. . . . Then I would be able to teach you more. Then I could take you to deeper places.” He touts this elusive, self-promoting message in a book, called Unveiling Reality, a series of edited transcripts from his meetings.

De Ruiter claims to want nothing from his acolytes, but he charges money for his lectures, and sells an ever-expanding line of merchandise — his own book, flattering portraits of himself, audio and video tapes. He has managed to cultivate a broad following and is a rising star in the international guru circuit. Several times a year, he flies to cities in Europe, India, and Australia, where he fills auditoriums with hundreds of seekers, most of whom are white, middle-aged, and affluent. Some will leave their lives behind and move to Edmonton, joining approximately 250 full-time devotees from around the planet. Most board with other members. All of them accept that de Ruiter is, as he claims, “the living embodiment of truth.”
– Source: The gospel according to John de Ruiter, Saturday Night Online, Canada, May 5, 2001

The story goes that John de Ruiter was 17 when he had an awakening, a “flowering inside that made everything in this existence pale in comparison,” then disappeared as quickly as it arrived. The story goes that it took several years of searching for him to find it again, but once he did, it would change everything. He was born in Saskatchewan but grew up in Stettler, Alberta, one of four children of Dutch immigrants, the son of a shoemaker who later took up the craft himself. He met his first wife, Joyce, in 1981 after walking into the Christian bookstore where she worked. He was 22 years old, tall and handsome. She would later say she was drawn by his eyes.

He spent some time in Bible school and later preached at Edmonton’s Bethlehem Lutheran Church, but he clashed with church leadership and strained against the bounds of the established institution. During one sermon, he stood weeping, repeating “God wants to set you free.” Another day he didn’t deliver a sermon at all, telling the congregation, “There’s no word. God has no word for you.”

But delivering his testimony to church leaders he spoke for nine hours straight, and those present knew they’d witnessed something exceptional. When he left the church, a handful of couples followed. He began preaching to them in his home, and soon, they started giving him money.

In 1996, he gave up shoemaking, and by the next year the first news stories began appearing. “Messenger of Beingness: Believers think Edmonton man is conduit from Jesus Christ,” one headline read. “Blue-eyed savior: Followers of this charismatic guru say he’s the real thing and Edmonton may be the new Jerusalem,” read another.

He was an unlikely messiah, a long-haired man from rural Alberta who liked monster trucks and drove a motorcycle. But his following grew into the dozens, then the hundreds, and their devotion intensified. Sometimes his followers wept and clung to him, kissed his feet, supplicated themselves before him on the floor.

In early interviews, de Ruiter described meeting Jesus on a highway in Alberta, and said Jesus then appeared to him thousands of times and “transferred who he is over to me to do as he did.”

But before long de Ruiter’s preaching drifted toward a more new age message, his second awakening becoming not a meeting with Christ but an experience of being “re-immersed in the benevolent reality of pure being.”

He also adopted the approach for which he would become known: Prolonged periods of staring and “silent connection” with his followers. During the staring sessions, some who looked into his eyes had intense visions and hallucinations, transcendent and even near-death experiences. Sometimes de Ruiter would stare intently at one person for half an hour or more, his gaze never wavering.
– Source: Jana G. Pruden, Are a spiritual leader’s sexual relationships a calling or a dangerous abuse of power? The Globe and Mail, November 26, 2017