Currently [last updated in June, 2018] Lakewood Church is the largest megachurch in America, with an average weekly attendance of 50.000 people.

According to the church’s financial statement for 2017 it has an annual budget of around â‚¬90 million. A mere â‚¬1.2 million of it was spent on mission and outreach. 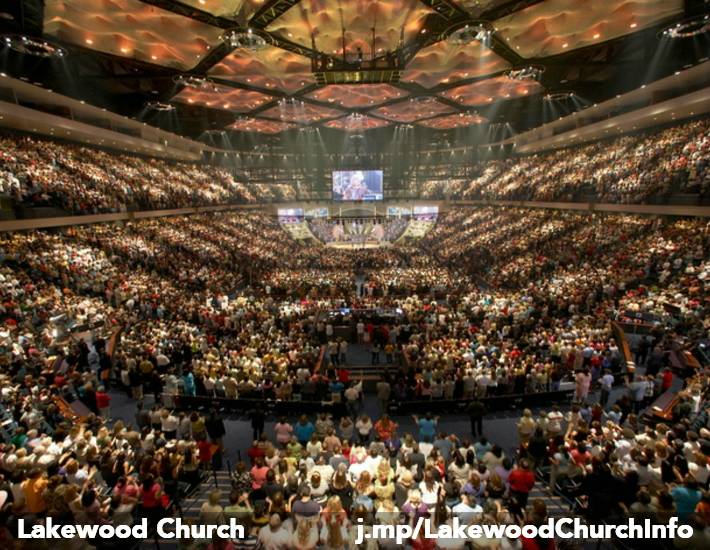 Lakewood Church meets in the former Compaq Center, where the NBA Rockets team once played. 1

The Church Report listed Osteen’s Lakewood Church at number 5 in the 2005 “Top 50 Most Influential Churches” survey.

Lakewood Church is located in one of the poorest areas of northeast Houston. Dr. John Osteen, father of current pastor Joel, started the church in a feed store. A model of that former meeting place was displayed in the main entrance of the 7,000-seat worship center eventually built by the congregation.

Joel became pastor of the church when his father died in 1999. In several God-size steps, Joel led the church to begin a second, then third and fourth worship service. Attendance doubled from 11,000 in 1999 to 22,000 one year later. In early 2004, Lakewood was listed as both the largest and the fastest growing church in the nation when attendance reached 25,000. By early 2005, the church became the first in the U.S. to exceed 32,000 average weekend attendance.

Houston’s COMPAC Center and arena, former home for the Houston Rockets, was redesigned by Morris Architects (designers of the Astro-Dome) in the summer of 2005 as the new home for Lakewood Church. The 16,000-seat center promises to allow the church to potentially exceed 50,000 attendance during its first season at the new site.
– Source: Top 50 Most Influential Churches by The Church Report.

Business Week, in its May 2000 article, “Earthly Empires – How evangelical churches are borrowing from the business playbook,” explained

There’s no shortage of churches in Houston, deep in the heart of the Bible Belt. So it’s surprising that the largest one in the city — and in the entire country — is tucked away in a depressed corner most Houstonians would never dream of visiting. Yet 30,000 people endure punishing traffic on the narrow roads leading to Lakewood Church every weekend to hear Pastor Joel Osteen deliver upbeat messages of hope. A youthful-looking 42-year-old with a ready smile, he reassures the thousands who show up at each of his five weekend services that “God has a great future in store for you.” His services are rousing affairs that often include his wife, Victoria, leading prayers and his mother, Dodie, discussing passages from the Bible.

Osteen is so popular that he has nearly quadrupled attendance since taking over the pulpit from his late father in 1999, winning over believers from other churches as well as throngs of the “unsaved.” Many are drawn first by his ubiquitous presence on television. Each week 7 million people catch the slickly produced broadcast of his Sunday sermons on national cable and network channels, for which Lakewood shells out $15 million a year. Adherents often come clutching a copy of Osteen’s best-seller, Your Best Life Now, which has sold 2.5 million copies since its publication last fall.

To keep them coming back, Lakewood offers free financial counseling, low-cost bulk food, even a “fidelity group” for men with “sexual addictions.” Demand is brisk for the self-help sessions. Angie Mosqueda, 34, who was brought up a Catholic, says she and her husband, Mark, first went to Lakewood in 2000 when they were on the brink of a divorce. Mark even threw her out of the house after she confessed to infidelity. But over time, Lakewood counselors “really helped us to forgive one another and start all over again,” she says.

Disney Look
Osteen’s flourishing Lakewood enterprise brought in $55 million in contributions last year, four times the 1999 amount, church officials say. Flush with success, Osteen is laying out $90 million to transform the massive Compaq Center in downtown Houston — former home of the NBA’s Houston Rockets — into a church that will seat 16,000, complete with a high-tech stage for his TV shows and Sunday School for 5,000 children. After it opens in July, he predicts weekend attendance will rocket to 100,000. Says Osteen: “Other churches have not kept up, and they lose people by not changing with the times.”

Pastor Joel is one of a new generation of evangelical entrepreneurs transforming their branch of Protestantism into one of the fastest-growing and most influential religious groups in America. Their runaway success is modeled unabashedly on business. They borrow tools ranging from niche marketing to MBA hiring to lift their share of U.S. churchgoers. Like Osteen, many evangelical pastors focus intently on a huge potential market — the millions of Americans who have drifted away from mainline Protestant denominations or simply never joined a church in the first place.

To reach these untapped masses, savvy leaders are creating Sunday Schools that look like Disney World and church cafe’s with the appeal of Starbucks. Although most hold strict religious views, they scrap staid hymns in favor of multimedia worship and tailor a panoply of services to meet all kinds of consumer needs, from divorce counseling to help for parents of autistic kids. Like Osteen, many offer an upbeat message intertwined with a religious one. To make newcomers feel at home, some do away with standard religious symbolism — even basics like crosses and pews — and design churches to look more like modern entertainment halls than traditional places of worship. […]
– Source: Earthly Empires – How evangelical churches are borrowing from the business playbook Business Week, May 23, 2005.