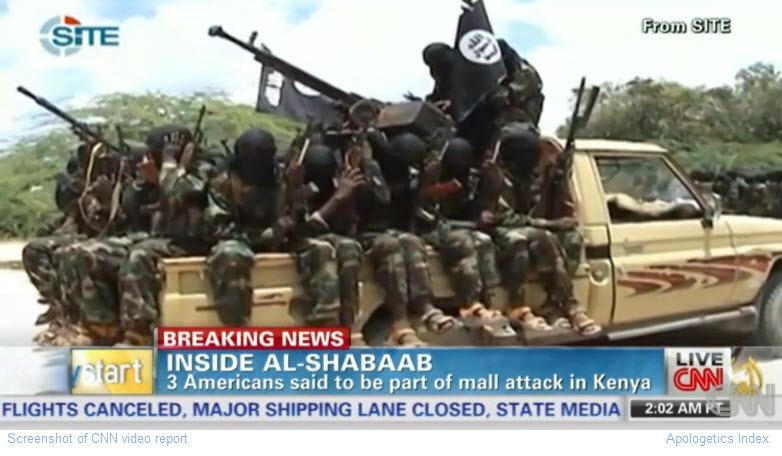 Al Shabaab has been designated as a terrorist organization by Australia, Canada, Norway, Sweden, the United Kingdom and the USA.

The government of Canada lists al-Shabaab as a terrorist group, saying it is “an organized but shifting Islamist group dedicated to establishing a Somali caliphate, waging war against the enemies of Islam, and removing all foreign forces and Western influence from Somalia.” 3

The U.S. Department of State, in its statement announcing the group had been designated as a Foreign Terrorist Organization, said, “Al-Shabaab is a violent and brutal extremist group with a number of individuals affiliated with al-Qaida.” 4

This video is part of a series of reports covering Al-Shabab’s September, 2013, attack on a shopping mall in Nairobi, Kenya.

A BBC reporter interviewed an al-Shabaab cell leader who said he had two aims: “to become a martyr and to ensure that the country is governed by Sharia law.” 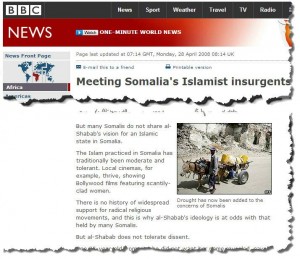 “As al-Shabab, we don’t care about people who don’t want Sharia law,” he says.

“Our goal is to have Sharia as the permanent law of our country, and to get the infidels out of our country, whether they are Ethiopians or Americans.”
– Source: Rob Walker, Meeting Somalia’s Islamist insurgents BBC, Apr. 28, 2008

But Walker notes, Somalia has always enjoyed a moderate, tolerant form of Islam — and many Somalis do not share al-Shabaab’s vision for an Islamic society based on extremism.

Yet, the group’s violence ensures that few people speak out:

In 10 years of visiting Somalia, what is really striking is not just the growth in extremism in the country but the fear among ordinary Somalis to talk about it.

In 2010, Max Fisher said in The Atlantic that al-Shabaab and al-Qaeda have little in common.

While both are violently Islamist, only al-Qaeda is ideology-driven, espouses global ambitions, and a has history of terrorism simply for the sake of killing. Al-Shabaab seeks only to rule Somalia and to impose an extreme form of Islamic law. 5

Fisher speculated as to why the group claimed responsibility for a series of July, 2010 bombings in Kampala, Uganda, in which more than 70 people died.

“The decision to bomb civilian gatherings in Kampala was almost certainly tactical,” he wrote, suggesting that there were two possible explanations:

The first is that al-Shabaab is feeling increasingly threatened by the African Union force and is desperate to forestall or prevent the planned addition of 2,000 peacekeepers. […]

The other possibility is that al-Shabaab is stronger than we think and that this attack is the beginning of a push to expand its reach.

A year later, in September, 2013, al-Shabaab terrorists carried out an armed attack in a Nairobi, Kenya, shopping mail. The Red Cross confirmed 68 fatalities and 120 people injured. The attack came in retaliation to the 2011 decision by the Kenyan government to join Somalia in its fight againt al-Shabaaab. 7 8