In America, the movement protesting against liberal theology became known as ‘fundamentalism’.

Fundamentalists believed not only in the verbal inspiration and infallibility of the Bible, but also in a whole series of evangelical doctrines published around 1909 under the title of THE FUNDAMENTALS.

The writers included such men as B B Warfield, H C G Moule and James Orr. They emphasized the substitutionary death of Christ on the cross, the reality of eternal punishment, and the need for personal conversion.

In later years the term ‘fundamentalism’ came to denote an unduly defensive and obscurantist attitude which was anti-scholarly, anti-intellectual and anti-cultural. For this reason, many conservative theologians who might be regarded as heirs of the original fundamentalists disown the label today.
– Source: Handbook To The History Of Christianity, ed. Tim Dowley (Lion, Berkhamsted, England; Eerdmans, Grand Rapids MI, USA, 1977) p 596.

1 a often capitalized : a movement in 20th century Protestantism emphasizing the literally interpreted Bible as fundamental to Christian life and teaching b : the beliefs of this movement c : adherence to such beliefs
2 : a movement or attitude stressing strict and literal adherence to a set of basic principles
– Source: Merriam-Webster

In news reports and secular articles, the term “fundamentalist” often is applied to any group or individual that fits the second definition shown above. Fundamentalists are often, deservedly or not, portrayed as intolerant, unyielding, and backward.

When using the term we suggest people follow the Associated Press Stylebook‘s advice:

fundamentalist: The word gained usage in an early 20th century fundamentalist-modernist controversy within Protestantism. In recent years, however, fundamentalist has to a large extent taken on pejorative connotations except when applied to groups that stress strict, literal interpretations of Scripture and separation from other Christians.

In general, do not use fundamentalist unless a group applies the word to itself.
– Source: The Associated Press Stylebook and Briefing on Media Law

fundamentalism, fundamentalist: A Christian religious movement that began in the U.S. in the late 19th century and early 20th century to counter liberalism and secularism. It emphasized the inerrancy of the Bible. In recent years, fundamentalist and fundamentalism have become associated with any religious reactionary movement, such as Islamic fundamentalism. The words also have been used as pejoratives. Journalists often, and erroneously, label all conservative Christians, including conservative evangelicals, as fundamentalists. It is best to avoid the words unless a group applies the terms to itself.
– Source: Religion | Stylebook

Rick Ross — a controversial, blustering cult watcher with a particularly nasty approach to Christianity — often uses the term ‘fundamentalist’ when referring to news items about Christians — even when neither the story nor the situation, nor the theological leanings and affiliations of the people involved warrant it.

In most cases such usage of the term is a demonstration of ignorance, at the very least. 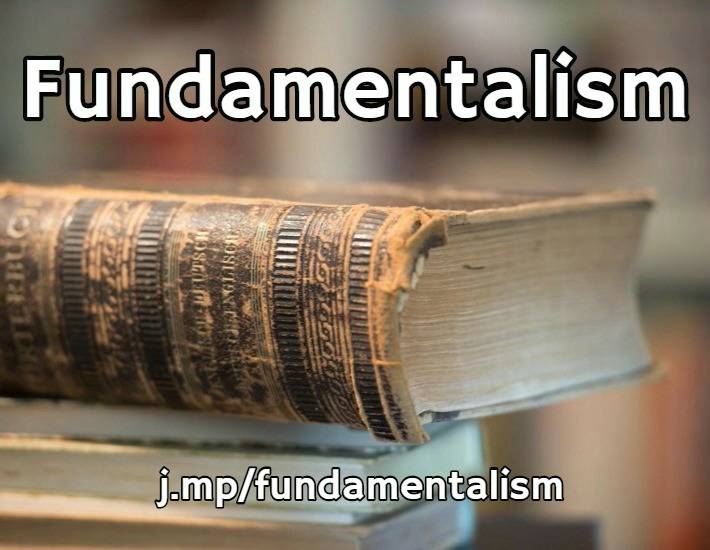 You are welcome to use this ‘fundamentalism’ graphic on websites, social media, etcetera