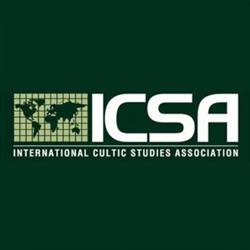 The International Cultic Studies Association (ICSA) is an interdisciplinary network of academicians, professionals, former group members, and families who study and educate the public about social-psychological influence and control, authoritarianism, and zealotry in cultic groups, alternative movements, and other environments. Founded in 1979 as AFF (American Family Foundation), ICSA took on its current name in late 2004 to better reflect the organization’s focus and increasingly international and scholarly dimensions. ICSA is guided by a distinguished Board of Directors and Executive Advisory Board– Source: About ICSA and Overview of Issues

The reasons behind the name change provide insight into the nature and direction of the ICSA:

The change of name had been discussed for many years. Until a few years ago, those who felt that “AFF” had established an identity and was “known” had prevailed. However, several factors tilted the name-change decision in favor of those wanting a change.

First of all, the constituency of the organization has changed over the past 25 years. Initially, nearly everybody who contacted AFF for help did so because he/she had a child involved in a cultic group. AFF’s unique role was to bring these parents into contact with helping professionals, increasing numbers of whom became interested in and/or involved with AFF as time passed. By the early 1990s, however, the majority of people contacting the organization were former group members who had left their groups without an intervention (“walk-aways”). By the late 1990s, AFF and people associated with the organization had completed a sizeable body of research and an increasing number of people, particularly researchers, from outside the United States began to get involved with the organization. At some recent conferences 25% of the attendees were from outside the U.S. Today, we speak of our four international “constituencies” of family members, former members, researchers, and helping professionals (including mental health, law, clergy, educators — some of whom are also former members of groups or family members of involved persons). Consequently, although “family” may have reflected the organization’s focus in its early years, it no longer is THE focus, though it still remains a vital concern.

Most people favored “cultic studies” because it expressed the organization’s interest areas without being so narrow and precise as to exclude phenomena that might be similar but not equivalent to those associated with the admittedly vague concept “cult.” Many high-control or abusive groups from which people leave are not necessarily “cults” in a strict sense, but they may nonetheless resemble “cults” in some ways. “Cultic studies” also gives us a link to the past, for our journal has used that term since 1984 and our main Web site has used the term for the past several years.

The growth of the Web has also influenced the name change in that nearly everybody who contacts the organization today found out about us through a Web search. And these people rarely ever heard of “AFF” or “American Family Foundation.” Therefore, a name that more accurately reflects what concerns the organization will more effectively “welcome” Web surfers than a name that many people associate with right wing political organizations, despite the fact that AFF/ICSA has always included people from across the political and religious spectrums.– Source: ICSA E-Newsletter Vol. 4, No. 1, Feb. 2005

The Benefits of Dialogue

Over the past 15 years the 35-year-old organization has undergone a gradual but significant change. It has recognized and acknowledged that the polarization between the so-called “anticult movement” (ACM) and an interest group of academics, the so-called “procultists” has had many deleterious consequences.

In a noteworthy article authored by the ICSA Board of Directors the organization says that, “Although these negative consequences have continued into the present to a degree, some individuals within the two camps fortunately have recognized the stifling effects of polarization.”

The article highlights the contribution of Eileen Barker, who “was the first to try to bridge the “great divide” between the two camps.”

At its 1999 annual conference in Minneapolis, Minnesota, AFF, with some trepidation, hosted a panel discussion, “Can Cults Change? The Case of ISKCON.”[7] One of the panelists, Radha Dasi, an attorney, spoke about human rights in ISKCON, detailing her grievances with the organization to which she remained faithful. Her paper was perhaps the most well received and sought after of the conference.

The dialogues with ISKCON and Dr. Barker and her colleagues were liberating. They compellingly demonstrated that the sterile polarization of the past did not have to be permanent. There was still much about which we disagreed. But, given the many years during which the two sides had hurled simplistic stereotypes at each other, the amount of agreement was startling. We were not humans and Klingons grudgingly approaching a peace table in a Star Trek episode. We were humans and humans discovering how much we had in common.

The dialogue begun in the late ’90s has continued and expanded. The communication has enriched the views of people on both sides of what once was, but is no longer, a great divide.
– Source: Benefits of Dialogue, ICSA Today, 2013, Vol. 4, No. 3, pp. 2-7

At Apologetics Index we have always clearly stated our views regarding those who have dismissed the testimony of cult victims and have instead, to one extent or another, essentially defended cults.

At the same time, we also have always promoted religious freedom and encouraged research. And our guiding value in operating Apologetics Index is that even while we ourselves are not neutral in our views, we provide research resources from a variety of perspectives.

As such we value and support the changes that have taken place — and continue to take place — with regard to ICSA’s approach.

We encourage you to read: Benefits of Dialogue