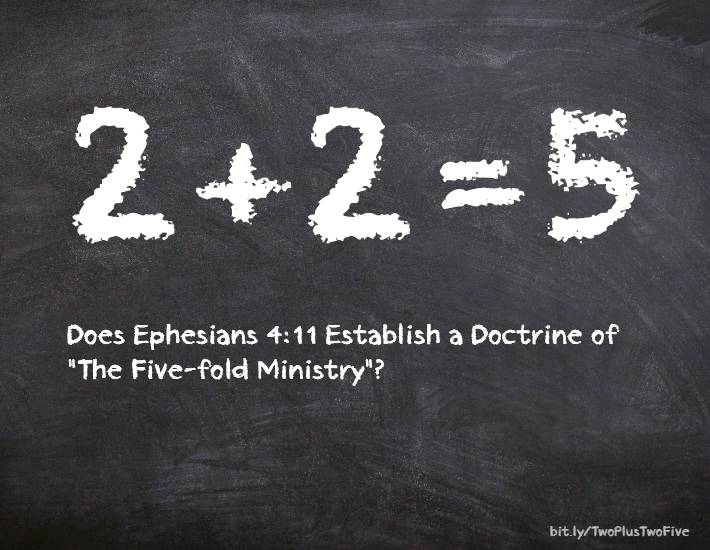 Does Ephesians 4:11 Establish a Doctrine of The Five-fold Ministry?

Is the following verse enough for establishing a five-fold ministry doctrine (as suggested by proponents of the New Apostolic Reformation)?

We should first note that a comparison of Paul’s listings of gifts and functionaries (types of gifted ministers) are not exhaustive but illustrative. Most commentators agree that Paul gives no clue here that he meant “these and no more.” The same reasoning that develops a five-fold ministry doctrine could develop an eight-fold ministry doctrine from 1 Corinthians 12:28:

We could similarly develop a seven-fold ministry doctrine from Romans 12:6-8:

“Since we have gifts that differ according to the grace given to us, each of us is to exercise them accordingly: if prophecy, according to the proportion of his faith; if service, in his serving; or he who teaches, in his teaching; or he who exhorts, in his exhortation; he who gives, with liberality; he who leads, with diligence; he who shows mercy, with cheerfulness.”
– Source: Romans 12:6-8 NASB

Thus, many commentators have suggested we preface this list in Ephesians 4:11 with something like “these are some of the gifts that he gave.”

Furthermore, many Greek scholars join the last two items in the verse and consider this a dual-reference to just one functionary:

There are particles before each of the functionaries listed, but none before didaskalos (teacher). With “pastor” joined to “teacher” by the conjunction kai, every scholar I have read on the topic insists that there is a joining of the two functions in one person — the teaching shepherd (what we would call pastor [the overseer who must be able to teach — 1 Timothy 3:2]).

The NASB, perhaps the most reliable, literal translation, shows the two as united by placing an “and” just before “some as pastors and teachers.” This first “and” is unnecessary if one is to see the last two functionaries as separate items in a list.

Thus, in Ephesians 4:11, it seems we have a listing of four functionaries that is not meant to be exhaustive — not the establishing of a five-fold ministry doctrine.