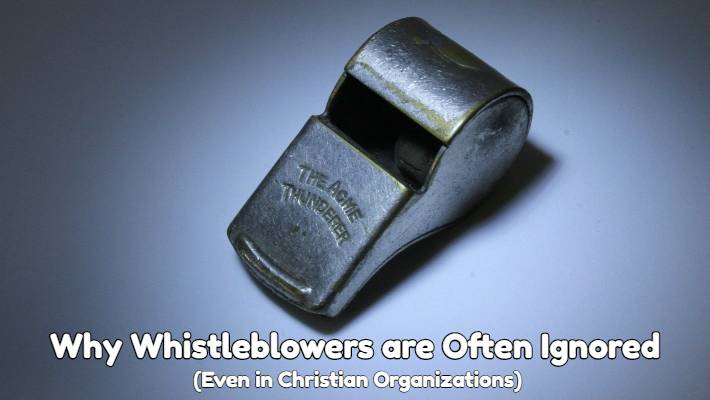 It seems anytime revelations of sexual harassment or other misconduct in a corporate, government, educational, sports, entertainment, or religious organization surface, we learn that people who had tried earlier to expose the misconduct were ignored, their evidence was swept under the rug, and the whistleblowers were often punished in some manner. This dynamic develops because the case is usually not handled by a truly neutral party and the group politics involved do not favor the whistleblower.

By nature, whistleblowing is done by someone of lower rank who tries to expose the misdeeds of someone in a higher rank (were it the other way around the superior would simply fire the subordinate). Thus, the whistleblower appeals to someone whose position is even higher than the evildoer they seek to expose. There are at least two reasons this supervisor will be biased in favor of the evildoer.

First, exposure of misdeeds in the organization will sully its reputation (and reflect poorly on the supervisor’s supervision) and the supervisor will want to avoid the bad PR that would result.

Secondly, since the evildoer will be higher up in the organization, he or she will have more friends in high places than will the whistleblower. High-ranking friends of the evildoer will put pressure on the supervisor(s) to vindicate their buddy. Siding with the lowly whistleblower will not benefit the supervisor(s) in the group politics that help them maintain the position(s) they covet.

Other observers who may have expressed their conviction that the whistleblower was fully justified in what they were doing will tend to clam up when a more powerful figure or group within the organization sides with the evildoer against the whistleblower (these observers do not want to be officially on the losing side).

Everyone wants to cover themselves and protect their own position in the organization. If someone knows there has been misconduct but the guilty party has been vindicated by higher authorities whose responsibility it is to address such misconduct, lower-level parties will feel unable to do anything since they cannot overrule the higher-ups and any reporting of the matter to outside entities (such as the news media, an attorney, or the government) will be viewed as disloyalty and insubordination — something that will likely result in their termination or a demotion of some kind.

If the effort to expose misconduct done by one or more superiors fails, the whistleblower will tend to be stigmatized within the organization as a troublemaker who is not a team player. Ironically, they will be viewed as an evildoer for making waves when they should have protected the reputation of the offending parties and of the organization as a whole. It is fear of this consequence that keeps many people from reporting misdeeds at all.

Still, whistleblowers must follow their conscience and report misconduct when they become aware of it. If one has been personally offended in a Christian organization the proper first step is to confront the offender before notifying superiors (if he or she truly repents “you have won your brother” [Mt 18:25]), although crocodile tears and seemingly sincere apologies by the offender may only be only efforts to elicit sympathy and deflect the accusation if evidence shows the offense is part of a long series of such acts in other circumstances or toward others. He or she may have been through this skilled act of “contrition” before without a change in behavior (this happens). Regardless of the outcome at that time (most likely the evildoer will eventually be exposed as he or she becomes emboldened to continue in their misconduct and to transgress in other ways), the whistleblower has done the right thing. He or she will be vindicated in eternity and his or her conduct will have the approval of the highest authority — God.