Some religious movements practice shunning. They require members to shun (avoid) anyone who has left (apostates) or has been expelled (‘excommunicated‘ — also known as ‘disfellowshipped’ from) the movement, church, or group.

Members are not to interact with those who are being shunned. In some religious movements such former adherents, including one’s own family members, are to be considered as if they were ‘dead.’

Various destructive cults, such as Jehovah’s Witnesses and Scientology, practice such extreme forms of ostracism that scholars use terms such as “psychologically devastating” to describe the impact.

What the Bible teaches about shunning

The Bible does not teach that Christians much shun former members. It does teach that someone who refuses to repent from sin must be expelled from fellowship. That is, they are no longer considered members of the Christian Church.

I wrote to you in my letter not to associate with sexually immoral people — not at all meaning the people of this world who are immoral, or the greedy and swindlers, or idolaters. In that case you would have to leave this world. But now I am writing to you that you must not associate with anyone who claims to be a brother or sister but is sexually immoral or greedy, an idolater or slanderer, a drunkard or swindler. Do not even eat with such people.

The author of an article titled, Jehovah’s Witnesses and Shunning, explains:

Clearly, Paul did instruct Christians to expel from the congregation’s fellowship any person who was purposely practicing willful sin. The disassociation would quite naturally exclude them from being greeted by the identifying “holy kiss,” as well as not being allowed to share in meetings and the meals for Christian worship and prayer.

However, Paul’s instruction did not prohibit normal conversation or witnessing to former members. Nor were they barred from attending worship in the temple or the synagogues. Jesus, the apostles and Paul, along with the rest of the Jews, worshipped God both publicly in the temple and synagogues, and privately with small groups in various homes. (Acts 5:42) It was from the private Christian fellowship for worship that sinners were excluded.
– Source: Anonymous author, Jehovah’s Witnesses and Shunning. 1 Copyright, 1966.

Disfellowshipping is part of a series of progressive steps in a church discipline process as described in the book of Matthew:

“If your brother sins against you,[a] go and rebuke him in private. If he listens to you, you have won your brother. But if he won’t listen, take one or two more with you, so that by the testimony of two or three witnesses every fact may be established. If he pays no attention to them, tell the church. But if he doesn’t pay attention even to the church, let him be like an unbeliever and a tax collector to you.

Someone who persists in sin 2 — ignoring private and ecclesiastical rebukes — is placed outside the fellowship of believers. That means that you no longer treat that person as if he were a member of your fellowship.

After all, someone who walks in sin is not a Christian (a word that means, “follower of Christ“).

Treating someone like “an unbeliever and a tax collector” does not mean to completely ignore the person or to consider the person as if he or she were dead.

Jesus himself interacted with unbelievers. Likewise, Christians are supposed to love non-Christians:

Shunning is practiced, in one form or another, in various religions, cults and sects. This includes — but is not limited to — Islam, the Amish, the Jehovah’s Witnesses, Mennonites, the Church of Scientology (“disconnection), the Exclusive Brethren 3, and so on.

In its extreme forms — such as in Islam, the Scientology cult, and Jehovah’s Witnesses 4 — shunning is a destructive practice.

The Jehovah’s Witnesses are hardly unique in sometimes removing folks from membership in the congregation.

“Almost any religious body would, on occasion, drop a membership – by request, due to inactivity or as a matter of discipline due to some kind of moral failure,” said Ron Stansell, professor of religion studies at George Fox University.

Catholics, for instance, can be excommunicated – denied sacraments considered their means of salvation.

But the Jehovah’s Witnesses are among a minority of Christian groups in the United States known to cut off social – and, as a result, business and family – contact with the disfellow- shipped.

Such shunning is “a fairly common practice of radical reformation sects, groups that tend to be drawn in very much on themselves,” said Carl Raschke, a Denver University religious studies professor.

Other practitioners include certain Old Order Mennonite and Amish communities, Hutterites and the Bruderhof.
[…]

Disfellowshipping is not the most radical practice out there, Colorado College professor David Weddle said. Some ultra-orthodox Jewish congregations, for example, go so far as to hold funerals for former members who decide to marry outside the religion.

And in some extremist Islamic groups around the world, apostasy (renunciation of faith) is considered punishable by death.
– Source: Karen McGowan, Many Religions Remove Members, The Register Guard, March 2, 2003

You’ll find research resources on shunning below this graphic 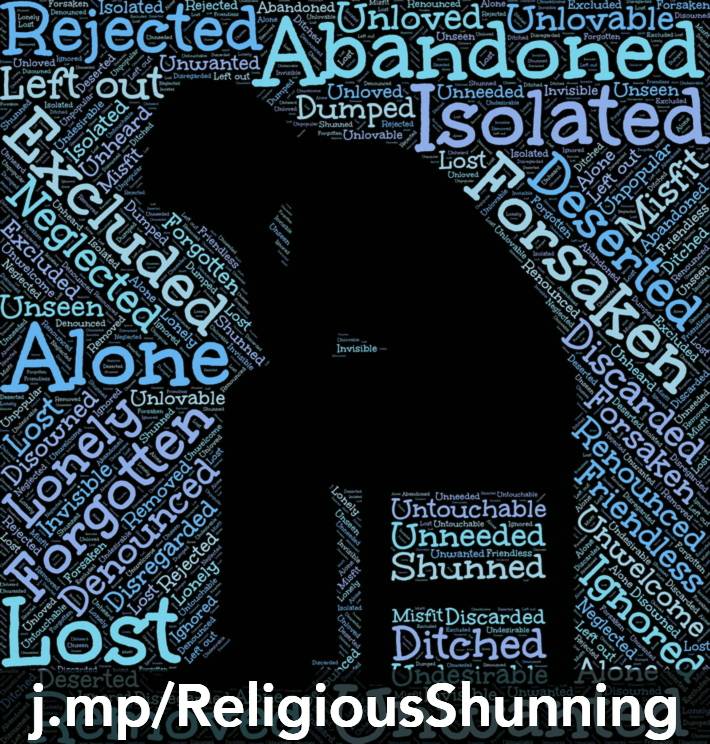 Thanks for sharing this graphic on religious shunning with others.

Former Jehovah’s Witness John Cedars says, “In this short video I share my thoughts on the relentless nature of shunning, namely the way it can continue punishing you long after you have left the abusive Jehovah’s Witness faith.”

BBC item on shunning as practiced by Jehovah’s Witnesses. Former members describe being shunned and the psychological problems this has caused: