NOTE: The World Mission Society Church of God and/or its adherents post many blogs, web sites and YouTube videos connecting the church’s name with the term ‘cult’ or ‘heresy’ — only to then try and show why it should not be considered as such. That’s fair enough, but it would be more honest if the intentions (and source of information) was made more clear from the outset.

Just so there is no misunderstanding: At Apologetics Index we consider the World Mission Society Church of God to be theologically a cult of Christianity due to its heretical teachings. 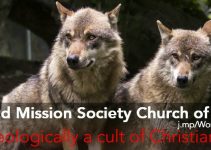