Televangelist Marilyn Hickey is a prominent Word-Faith teacher. Known for manipulative, deceptive fundraising tactics based on the so-called ‘Prosperity Gospel.’

Sometimes referred to as “Dr. Marilyn Hickey,” but according to Wikipedia Hickey holds a Bachelor of Arts in Collective Foreign Languages from the University of Northern Colorado and an Honorary Doctorate of Divinity from Oral Roberts University. 1

Marilyn Hickey Ministries is currently led by Hickey and her daughter, Sarah Bowling. 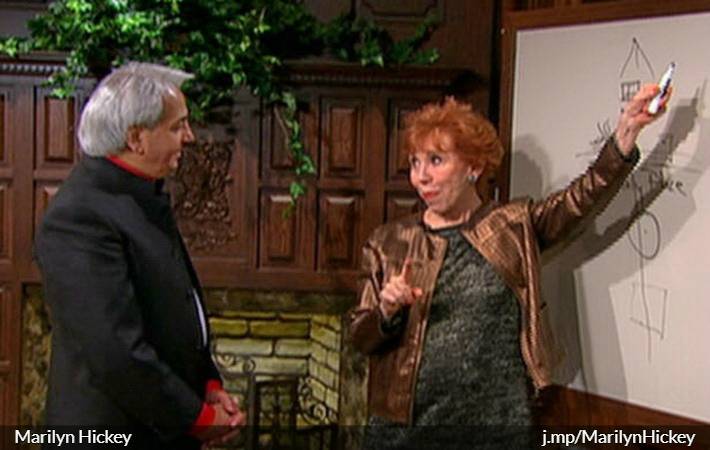 Note: While researching various televangelist who promoted the prosperity scam I watched Ms. Hickey teach this very principle via a TV station in Southern California. Ten minutes later she told her viewers that if we didn’t send money, her program would have to be dropped from the station. That meant Ms. Hickey did not believe her own teachings. If she did — and if the prosperity scam worked as she claimed — she would not have needed to ask her viewers for donations.

Instead, in addition to promoting the prosperity scam she uses deceptive fundraising tactics:

Marilyn Hickey is selling anointed red rubber bands to wear on the wrist for seven days for only $10.00. In the past she has offered blessed pennies, miracle carrot seeds and magical healing cloths. It is a travesty.
– Source: G. Richard Fisher, Can you be deceived?, Personal Freedom Outreach, Vol. 20, no. 3,
July-September 2000

The Christian Research Institute has this to say about Hickey:

Faith teachers such as Robert Tilton and his female counterpart, Marilyn Hickey, have copied many of the scams pioneered by Pentecostal preachers such as Oral Roberts and A. A. Allen. In fact, Tilton and Hickey have managed to exceed even their predecessors’ outrageous ploys. This is hard to believe when one considers what sort of schemes they had to outdo. […]

Marilyn Hickey, much like Tilton, employs a broad range of tactics to manipulate followers into sending her money. Among her many ploys are anointed prayer cloths, ceremonial breastplates, and ropes that can be used as points of contact. In one of her appeal letters, Hickey promises she will slip into a ceremonial breastplate, “press your prayer request to my heart,” and “place your requests on my shoulders” — all for a suggested donation.

For the most part, Hickey’s tricks and teachings are recycled from other prosperity peddlers like Tilton, Hagin, and Copeland. Her message is peppered with such Faith jargon as “the God-kind of faith,” “confession brings possession,” and “receiving follows giving.”
– Source: Hank Hanegraaff, What’s wrong with the Word-Faith movement?, Christian Research Journal, volume 15, number 3 (1993). PDF

‘Positive confession‘ — also known as ‘Name it and claim it’ (or, derisively, as ‘Blab it and grab it’) features largely in Marilyn Hickey’s unbiblical theology:

There is demonic activity and oppression in the physical body. If you have suffered with chronic sickness for years or you have hereditary illness in your body, it’s the work of demons. Physical infirmities such as allergies, arthritis, cancer, tumors, blindness, deafness, epilepsy, asthma, migraine, paralysis, often are caused by demon spirits. People that are restless and cannot sleep, I tell you, those are demon spirits, because even Matthew 12 tells you when demons are cast out, how they walk around looking for something. They’re restless. It said the wicked are restless. Why are the wicked restless? Because they’re driven, driven by demonic spirits. See, the Holy Spirit never drives you. He leads you. Demons drive you, and so that’s demonic activity.
– Source: Marilyn Hickey Show, October 1, 1998